As has been for most of the country, it has been raining or rainy here for the past two weeks. Today we actually had some sun! And it was nice. But I had been wondering whatever happened to the whole April Showers bring May Flowers. It's May, and all we were having was showers. Wrong month, right?

Diabetes has been doing a pretty good job of behaving itself lately. It makes it take somewhat of a backseat. It's easy to "forget" how much diabetes is a part of your life when it's behaving somewhat. But, it makes me happy to know that I can go through the motions without having so much stress, even if it is only for a little while.

Right now, my stress is focusing on work and trying to get everything caught up and done as much ahead as possible, since I'm leaving for a vacation in two weeks. Not easy, but I've been working hard and I'm hoping everything falls into place.

And, here's a picture of the cake I did over the weekend. It was very colorful and I even did some tie-dyed icing for border. It was my first attempt at this method and I thought it turned out pretty well. 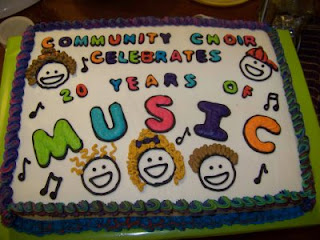 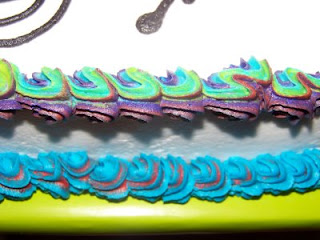 You got sun today? I'm so jealous! I can't take much more of this weather.. April's showers certainly showed up late, and it seems they've come with a vengeance haha!

Also, that cake looks great, you're very talented! And I agree, it's great when diabetes seems less intrusive :)

oh Ps. this is Seonaid (from makingthechoice) .. I started another blog, taking a little break from d-blogging I guess!