Lately, I've been dealing with a lot of different things. Diabetes is kicking my tail right now. Or maybe I'm letting it kick my tail. When I switched doctors to Vanderbilt Diabetes Center, my first A1c was 6.7. I knew that was higher than it had been running. And I didn't like it. It had slowly been creeping back up on me, due to a variety of reasons. My second appointment at Vanderbilt was last Wednesday. At that appointment, in less than the normal 3 month period, it had gone up again to 6.9. That is the highest A1c I've had since before going on CGMS. VERY close to being my highest since going on the pump.
I was NOT pleased with this. But I knew it was going to be high. I knew it was going to be something that was an issue for me.

First off, let me give you a little bit of background, I've been STRESSED. ALOT. My job is killing me right now. I've lost almost any desire to work there. The few aspects of my job that always annoyed me seem to be around all the time now, and the good parts seem to be getting fewer and fewer. Also, stress seems to seep into other areas of my life as well. This is effecting my diabetes. In the mix with this, I had a trip out of town (and we all know how that effects the blood sugars), or two or three. And I've been having trouble sleeping.
So, you see, diabetes has been crazy here lately. I'm quite positive, that without my CGMS, my A1c would have been much higher.
Still, I want it down. I'm currently tracking my blood sugars to fax to my nurse practitioner at the end of the week. I'm also doing my best not to get terribly stressed at work; you know, leave it there kind of thing.

In the midst of this, I've been attending a class called Financial Peace University that is a Dave Ramsey course. Dave Ramsey, if you didn't know, is a financial advisor and helps people to get and stay out of debt. If you have ever thought about getting out of debt, thought you had too much debt, weren't sure where all your money is going, or basically felt like you wanted to have more money to do fun stuff with, I highly suggest you check out Dave Ramsey. He's fantastic. And he doesn't just deal with money. Last week, the lesson was on working in your strengths. Basically, finding what you love to do and doing it as a career. If you are meant to be an artist, you're going to make a really bad banker...or at least not the banker you could be if you were meant to be one. :)
On of the books he mentions in that lesson is a book called 48 Days to the Work You Love by a man named Dan Miller. The book, so far (I'm only part way through), is touching on God's calling for our lives. Everyone is born with certain traits, certain good things they are good at. And yet, we spend all our time working on the things we AREN'T good at, instead of cultivating the good things. Hmmm...think about that for a while. 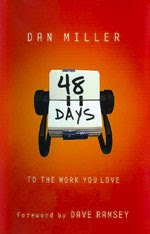 Anyway, there was a poem in the book that really touched me. And made me think that I need to start looking for ways to do what I love...but first I have to figure out what that is. :)
"A Prayer for Joy"
Help me, O God,
To listen to what it is that makes my heart glad
And to follow where it leads.
May joy, not guilt,
Your voice, not the voices of others,
Your will, not my willfulness,
Be the guides that lead me to my vocation.
Help me to unearth the passions of my heart
That lay buried in my youth.
And help me to go over that ground again and again
Until I can hold in my hands,
Hold and treasure,
Your calling on my life.
--Ken Gire, Windows of the Soul
I don't know what I'm going to do, or when, or how. But for now, this is my prayer. I don't think a job should make a person unhappy. And when it effects my diabetes health, it becomes even more of an issue. So today, I go to work to be the most positive, hard working person I can be. And to continue to pray for guidance and direction for what He wants me to do with my life.
Posted by Cara at 6:27 AM 5 comments:

Okay, I'm not really giddy. But it's the only word I could think of that was a synonym of Glee.

Let me start out by saying that this is another non-diabetic related post. Then let me continue by saying that I am a total nut. Most of you have already figured that out, but for those of you who haven't, you have been warned.

From some of my previous posts, you guys should know by now that I am a music nut and a theater nut.

And Fox Network has totally created the perfect show for me. Several months ago, Fox aired a pilot episode of Glee. When they aired it, I watched and LOVED it. I also stated to a friend of mine that it probably wouldn't last a season. Not because I didn't love the show, but because I didn't think that other people (we'll call them "normal" for the sake of this blog post) would appreciate the wonder that is Glee.

Apparently I was wrong. Glee has been a huge hit for Fox. I love it for all the reasons that most of the "normal" people do: Great music, cool dancing, and cheesy "Election" type filming.

And then I have my own reason: the cast of Broadway stars.
First off is Lea Michele, who plays Rachel on the show. Rachel is the "leader" of glee club and the star of glee as well. Lea Michele also originated the lead role of Wendla in the Tony Award Winning Spring Awakening (to which I have the soundtrack memorized...but have never been lucky enough to see).
Next, Matthew Morrison, who plays Will Schuester, their teacher, and advisor for glee club. Matthew Morrison originated the roll of Link Larkin in Hairspray on Broadway. Remember that little roll played by Zach Efron in the movie? Same roll. I say "Zach who?". I also have that soundtrack memorized....buy only got to see a local theater group perform the show this summer. No Broadway.
Also, Jenna Ushkowitz, who play Tina, another glee club member, was in Spring Awakening with Lea Michele for a while, although I do not believe she was in the original cast.

Then, two weeks ago, in an episode of Glee, there was a guest role. April was a former classmate of Mr. Schuester. April was played by Kristin Chenoweth. Kristin was in You're A Good Man Charlie Brown, when I saw it on Broadway in 1999. She won a Tony for that role. She then originated the role of Galinda/Glinda in Wicked. You guys have seen me post about Wicked. :)

So, as you can tell, it feeds into my addiction of Broadway....I'm just glad other people seem to like it. :) It means I might get to keep watching it for a while.

So, watch Glee tonight! I'll be at church. But tomorrow night is when I Hulu it. Oh, and I'll be buying the first season on DVD.

Below I am posting a video of one of the songs they did last week on Glee. It's not the best quality. But if you watch it, you'll get the idea of the show.

Music is a huge part of my life. Am I talented? Nope. I sing in the shower, in my car, and in my head pretty much all the time. But I'm not talented. Only obsessed. :)
Being from Tennessee, I have a great love for country music. But my love of music is not confined to one type of music. I often joke I have the most spastic playlist ever. I tend to go through phases.
For a while, I was on an 80's rock band kick. I started buying greatest hits albums from the 80's and the late 70's.
I've gone through a cabaret-type of phase, listening to Harry Connick, Jr, and Frank Sinatra, and anything by Gershwin.
I've also gone through (and to some degree am still going through) my Broadway phase.
But I like all kinds of music. I listen to alternative, country, rock, teeny-bopper, Broadway, easy-listening, praise, contemporary Christian, and nearly anything else you can think of.
Today, in fact, I got a Veggie Tales' song stuck in my head. :) Does anyone know the Cheeseburger Song??? :)
I've always said, if I had talent, I would have done something with music. I wake up with a song in my head. People can say a word or a phrase and a song that goes with it will pop into my head.
And I can always find a song for every situation. Every time of my life, every event, has a soundtrack of sorts in my head. I have a playlist to fit almost every mood. And music can fit a mood, an expression, an idea or a moment in ways that nothing else can.
So, while you watch the lovely Cheeseburger Song music video (oh, you know you want to!), think about what types of music you like, or how music has shaped you or effected you. And then comment! :)
Hope everyone has a lovely NDD post.