And here I am, just a few months later, breaking that promise already. But since this theater post involves diabetes all the way, I figured my readers would forgive me. About two weeks ago I saw a Twitter post that came from TuDiabetes. In that post there was a link to an article that totally blew my mind. Someone had written a musical about Type 1 diabetes. A musical called Andy & the Beats. Wow. Not only had it been written, they were putting on a production. And the most amazing part? It was in Knoxville, Tennessee. 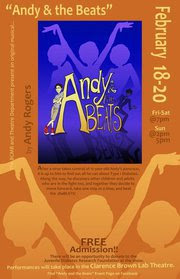 As with any diabetic, my first, knee-jerk, reaction was to be wary of a musical written about diabetes. How “wrong” would it be? Was it a joke? A comedy of errors? A random person’s attempt at making a joke of this disease we live with every day? I think most of us can understand a reaction like that. We deal with media misconceptions on a daily basis. Those of us in the diabetes online community spend out time trying to education and inform, often running into brick walls of ignorance over and over again. 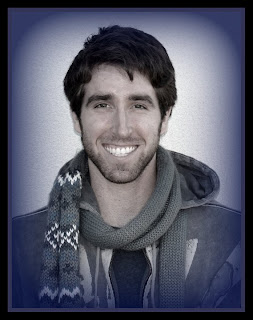 The initial article put me completely at ease because the writer of this musical, Andy Rogers, is living with Type 1 diabetes. So is his sister. Knowing that, my excitement took over and I started researching when and where this musical was going to be performed, and how I was going to make the time to be there.
There were only four performance times, admission was free with all donations going to benefit JDRF. While I was researching this show, I found Andy’s research paper online. Those of you who have ever written a research paper, or read one, know how boring they can be. This one was not. I read all 52 pages. And I cried. This was a story. It was the story of Andy and his sister. It was the story of their family and diabetes. Sure, there were the scientific parts, and the “technical” parts. But this research paper was a story that made me even more sure that Andy Rogers had written a special show that would education, inform, and entertain.

Sunday evening I arrived over an hour early. I’m not terribly familiar with the Knoxville area, and even less familiar with the University of Tennessee campus, so I wanted to be sure I got there in plenty of time. From posts on the Andy & the Beats facebook page, I knew that they had to turn away people from one of the performances, and that they had had a full house at the others. I was going to have a seat. And hour early was a good bet. I was the first person in line.

Being the first in line didn’t last long. Within 20 minutes there was a line all the way down the sidewalk. When they opened the house, Andy was at the door and you could see the amazement all over his face. Even though (from what I understood) they’d had full crowds every time. I knew with that kind of reaction from him, and the crowd size, that this show was going to be great.
And great it was. Andy Rogers played a 12 year old Andy who developed Type 1 diabetes after a virus attacked him. The Beats were 3 singing, dancing… well, I’m not exactly sure what they were other than maybe Andy’s guides to having diabetes. Regardless, they were fantastic. Played by Lauren Fitzgerald, Brooks Morelock, and Jessica Hunter, they made Andy’s transition into diabetes… well, kind of entertaining.
Andy was a healthy, happy 12 year old boy and then is attacked by Virus, played by James McGuire. The Beats show up to help Andy by explaining Type 1 diabetes and its symtoms to him and the audience in “The Symptoms Song.”
Andy’s mother takes him to a Dr. Arfaee, played with great comedy by Tina Arfaee. At one point she stabs an orange in Andy’s hand with a syringe. And when I say stabs, I mean STABS. :) How many of us remember learning to give a shot on an orange? *silently raises hand* The title of the song she sings while she stabs that orange: “Your New Friend, Insulin.” I laughed my head off during the entire song.
Andy’s mother, played by Martha Reddick, is very disturbed by the fact that her son can’t be “fixed” by a pill or a shot. Andy ends up in a conversation with his Pancreas, also played by James McGuire. Andy’s Pancreas is angry. So is Andy. They both want to know why this happened to them (sound familiar anyone?).
When they can’t figure out why, Andy starts searching for a cure. Stem-cell transplants, pancreas transplants, etc. It touches on all the reasons why they are still in research stages, or not good for a “healthy” person with diabetes. Andy then searches to make his own cure. After all, he’s a smart boy. When his “cure” fails, he becomes frustrated and sad.
In comes Campbell, another young person living with diabetes. Campbell is played by Campbell Garver, a child actually living with diabetes. Campbell lets Andy know he’s not alone and introduces him to other children with diabetes. Andy Rogers wisely, and beautifully used all children living with diabetes (a full list of names will be listed below).
The final song “Walk for the Cure” left me in tears. Obviously written for the JDRF Walk(s) to Cure Diabetes, the beauty wasn’t in the words (though they were beautiful in their own right), it was in the children singing those words. All I could think as I sat there was that I have just celebrated 25 years living with diabetes. And all I could do is cry and pray that these children don’t have to live for 25 years with diabetes. That there will be a cure before they reach that “milestone”. 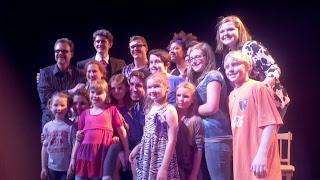 Andy Rogers did a wonderful job writing this musical. It’s informative, funny, a little snarky at times, touching, and it pulls at your heart strings. Even though the show has closed, I can’t help but hope that Andy has a way of keeping this show alive. Maybe local communities could do their own productions of the show? I believe that it should be done at Children’s Congress as well. Families affected by diabetes would LOVE this show.
Type 1 Diabetic Children:
-Campbell Garver
-Amanda Minutolo
-Autumn Barnett
-Natalie Olson
-Gwendolyn Dolenee
-Gavin Bentley
-Rachel Bentley
-Quinntin Bentley
-Catrina Estes
-Russell England
-Addysun Seaton-Camfield
-Dylan Green
-Riley Shover
-Ryan Hopkins
-Kelli Rogers
Posted by Cara at 8:24 PM

OMG Cara! If this show was ongoing I would fly out to see it. What a beautiful review of a musical that sounds so unique and movie I am crying (and I didn't even see the play).

Thank you for what you called "long winded" blogs. This was the perfect length, the perfect words and couldn't have been done better.

This is great Cara. Wish I'd known sooner, I would have liked to have gone as well.

As a side note, I know Russell England. He and his parents live here in Johnson City and are very active in our local D community.

And BTW your blog posts are just right!

Cara -
Fantastic review! Funny, touching, real and nothing long winded about it!
I'm hoping I get the chance to see the Andy & The Betes for myself, but until then, I'm so glad you reviewed it!
Kelly K

What a fabulous review. A diabetic musical right in your neck of the woods, how perfect. Thank you for sharing with us :)

I'm so glad you got to see this; I was curious how it would be. You're right: I do hope this will be performed elsewhere because I think many people and families impacted by this disease would appreciate it. Thanks for the review.

Your review made me cry too!!!! I so wish I could see it, it sounds like such a wonderful show. I do hope it somehow gets performed in other areas too.

WOW! SO EXCITING that you had the opportunity to see it :)

Thanks for sharing...I hope to be able to see it -- even if it's via YouTube or HuLu!

You should know that Andy Rogers, the person, my dear friend, is even more amazing than his playwrighting...and in fact!!! Because of the success, they are putting the show up again, but this time... with more songs, and couple more scenes, and the music director is adding orchestral music to it. So there will be an orchestra. AND ORCHESTRA. :) And hopefully, he'll continue to change lives!!! Yea!

Thanks Jess! I'll have to pay closer attention to the Facebook page. I look forward to seeing the show again!

This is a great post. It sounds like this show will help people with diabetes and their families and friends appreciate the psychological as well as the physical burden of diabetes. Don't back away from theater as it complements science. One speaks to the intellect and the other speaks to the heart.
Sybil Kramer MD
www.diabeticsurvivalkit.com

Hi Cara - I'm a family doctor writing what I thought was the first "Diabetes: The Musical", but just came across your post about Andy and the Beats. Since the topic (diabetes, though we focus mostly on type II) and the medium (musical theater) are close to your heart, wanted to share with you. We're currently nearing the end of a kickstarter campaign to raise funds to turn our play into a series of online webisodes that would be free to download and watch. Here's the link to our campaign: http://www.kickstarter.com/projects/539868944/diabetes-the-musical Thanks! - Rachel