I've never been exactly good at meeting new people. I tend to be slightly awkward and uncomfortable when it comes to people I've never met before. I've gotten better in recent years and I owe a lot of thanks to the D-OC for that.

The thing about meeting new people online is that the instant awkward meeting is almost nullified by the safety of the internet. We get to know each other before every meeting each other. Each time I've been blessed to meet someone from online in an offline setting, there's no awkwardness. Just instant friends. 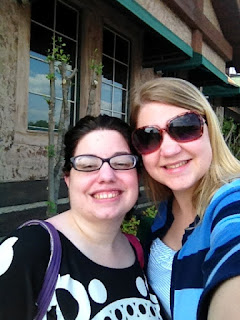 A little over a week ago I was blessed to get to meet another person from the D-OC. Victoria Cumbow is a fellow blogger and tweeter that I've gotten to know over the last year or so.

Through our online interactions I discovered that she grew up not too far from where I did (a little over an hour away) and that we both travel to Nashville on a fairly frequent basis.

We tried to meet up a few months ago, but it fell through, but when Victoria knew quite a bit ahead of time about an appointment in Nashville, I immediately requested the day off from work so that we could get together. We met up for coffee and breakfast and then, after Victoria's appointment, met up again for lunch and shopping.

I love when diabetes isn't the center of a conversation, but can still happen naturally. That always seems to be the case with my friends from the D-OC. And a day with Victoria was no different. It wasn't unusually for diabetes to creep into the conversation, but it didn't happen often. We shared other things and talked about other things. But when diabetes did come up, it didn't have to be explained. It just was.

Side note: If you get the chance to meet Victoria, do it. She's a blessing and a light in the D-OC and in life.
Posted by Cara at 7:44 PM

Oh lady, tears in my eyes. You are fabulous!! I cannot wait to see you again!!