After years of years of listening to misinformation about diabetes (all types) and dealing with the misconceptions of people who don’t have or care for someone who has diabetes, I shouldn’t be surprised when I hear or read another piece of false information regarding this disease that I’ve lived with for twenty-five years. But, I am. Almost every time. The shock may not be as much, but it’s still there.
This past week a (I assume) well-meaning individual wrote an article about his disturbance that a fundraiser for diabetes research would be held as an ice cream social. He continued on by stating several statistics relating to diabetes and then stating a series of examples of people living healthier lives after changing their eating habits when they were diagnosed with diabetes.

Mr. Wendell Fowler wrote that offering a person with diabetes ice cream was on the same level as offering an alcoholic a drink. I’m here to take Mr. Fowler’s misinformation and break it down into fact & fiction for you. And then explain to you the truth about living with diabetes.
Mr. Fowler stated that 1 in 10 people in America have diabetes. Truth. And that number is growing significantly. He also states the fact that the CDC estimates that 1 in 3 people will have diabetes by the year 2050. Also a truth.

Here’s where the misinformation can begin. There are different types of diabetes. Diagnoses of both types are growing. No one knows why. Type 2 diabetes, most often (but not always) diagnosed in adults is attributed to an inability to make enough insulin or for that insulin to properly be processed by the body. In some cases, losing weight and changing your lifestyle (food, exercise, etc.) can let you control diabetes without medications. In other cases (especially in those with insulin resistance) the body just cannot process the insulin it produces. There is not always a reason why. Some people with Type 2 diabetes do not have a weight problem at all. In cases like that, how would losing weight help? It wouldn’t.

Another thing to look at is the fact that not all people who are overweight have Type 2 diabetes. That in itself should tell you that there are genetics and other outside factors that play a part in diabetes developing in a person. So why would it be fair to lay blame on a person for developing a disease? It’s not. People diagnosed with diabetes (of any type) do not wish for this. We don’t ask for it. And we certainly wouldn’t want it if we weren’t handed it on the big ol’ platter of crazy called life.

The second thing that must be pointed out is that this specific fundraiser that Mr. Fowler spoke of was not a fundraiser for Type 2 diabetes. It was a fundraiser for Type 1 diabetes. Type 1 is most often (but not always) diagnosed in children. It is an auto-immune disease. Basically your body turns on itself and attacks the insulin producing beta cells in your pancreas. The end result is a body that produces no insulin. At all.

There is no reason that can be found for why the body turns on itself. Genetics, environmental things, a combination of both. There’s nothing that can explain it. When I was 4 years old, my body revolted. I ended up in the hospital and ended up with this disease that has been with me ever since. It’s not going anywhere. But I did NOT ask for it.

Although I am slightly overweight, my weight has nothing to do with my Type 1 diabetes. Even if I was firmly in my appropriate weight bracket, I’d still have diabetes. I’d still be hooked to an insulin pump twenty-four hours a day. I’d still have to count every single gram of carbohydrate that goes into my mouth.

A healthy lifestyle is important for all people. It doesn’t matter if they have diabetes and it doesn’t matter what type of diabetes they have. Moderation should be taught at home and in life. Healthy food choices are important for all areas of health, and it does bother me that Americans tend to make very poor food choices. But sugar is not what caused my diabetes (or the diabetes of anyone else, T1 or T2). So excuse me if I want to take my moderation and go out and have an ice cream sundae. Better yet, excuse me while I go get my pint of New York Super Fudge Chunk Ben & Jerry’s ice cream. No worries, I’m not going to eat it all. Just a bite or three before I stick it back in my freezer until my next sweet craving hits. 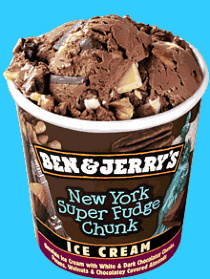 Mr. Fowler, I hope you read this. If not, I hope you read one of the many other posts written by those of us who are sick of blame and guilt. We didn’t ask for diabetes and we shouldn’t be punished by people who feel like we should never be allowed to have ice cream again. So next time you see a person in an ice cream parlor that takes an injection, or gets out an insulin pump to bolus, don’t judge. Turn the other way. Unless you want to learn. And then ask. I’m sure people will be glad to give you a crash course in life with diabetes while you both eat your ice cream.
Posted by Cara at 7:00 AM

I love the message of "don't judge." Thanks for writing this, Cara. :)

Excellent response to the misinformation. It's a shame we still have to put up with all the nonsense.

Thinking about ice cream . . . A very nice young woman at Ben & Jerry's offered to hand me a copy of the nutrition information along with my receipt a couple months ago. She saw my insulin pump -- her sister has T1 -- and thought that I might need the carb info for my delicious Chocolate Therapy cone.

That's the kind of reaction people with diabetes should get from people without diabetes when they see us eating ice cream.

Great post, Cara. Thanks for writing this. It's such a downer when people like think they "know it all" and decide to judge based on their own misconceptions and ignorance. Then that message just fuels the feedback and response from others who have the same misconceptions and don't get it... Our ice cream social event went great and raised a lot of money to help kids and families participate in D-Camp, but it's sad we also have to endure this kind of BS along the way. Anyhow, thanks again for the message and awareness.

Cara -
GREAT post & BEAUTIFULLY written!
I'm with Kerri, "don't judge," is a great message. Though I have to be honest, I'm judging Wendell Fowler!
Kelly K