Before I was taking care of my diabetes the way I should. Before I had CGMS. Before I was testing 8-12 times a day (yes, there was a time before), I had a few foods that I loved to eat. Foods that I would later discover cause major issues with my blood sugar. 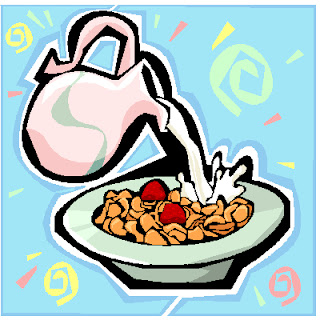 The two biggest ones are pizza and cold cereal. I used to eat cereal a couple of times a DAY when I was in college. And like most college (and high school) students, pizza was a several-times-a-week occurrence. Both are foods I loved.

But when I discovered that I have a horrible time with my blood sugars when I eat cereal or pizza, I began to cut down on them in my diet. With cereal, I have a nearly immediate spike in my blood sugar and it takes HOURS to get myself back in range. Sometimes a whole day! With pizza, I have a nearly immediate low and then around 3 to 4 hours later I spike and it lingers for many more hours.

I won't lie, I don't always say "no" to pizza and cereal. Sometimes, there's nothing like a slice or two of pizza for dinner, with a cold Diet Pepsi and a salad. And more often than not, I break down and buy a box of cereal. Cereal is probably the worst, cause I have a hard time not eating it when it's in my house. With pizza I can throw it out or, if I eat out, just not bring it home with me.

I always know that there are going to be blood sugar issues to deal with afterwards. But, sometimes I just have to have my guilty pleasure foods.

Do you have a food that you know messes with your blood sugar, but you go for it sometimes anyway?
Posted by Cara at 7:30 PM

On Monday, I was traveling through Philadelphia, where I'd lived ten years earlier, and had to get myself a cheesesteak. Part nostalgia, part really good authentic artery-clogging food.

Anyway, this was one of those meals where my blood sugar lingered at 270 for hours afterwards, no matter what I did, and then abruptly plummeted to 40. But it was worth every bite.

My son is like u with pizza, drops then rises so I started splitting his bolus up. Half the bolus at meal time, the other half an hour later. Works like a charm :)

Chocolate covered Rice Krispie Treats! I know what they do to me but if they are in the house, I eat them! All of them! And I hate myself afterward! Like Scott....high for hours and then a whopping 40 or so.But they are totally bolus worthy!Hey, we gotta be human, don't we??

Mexican food!!!! I usually dual wave and set a higher temp basal, but often still end up too high. :( I also rarely eat cereal because I just can't get a bolus right for that. I have mastered a pizza bolus that works for me though . . . so at least I've got one problem food figured out. :) (Spoiler alert: Pizza bolus will be the subject of my next Medtronic Loop post, which I turned in a few weeks ago)

Definitely pizza! I have it every so often when I need a treat.

Cold cereal and most definitely Chinese Food. Horrible. Outside of an eggroll, haven't eaten it in over 2 years.

Pop tarts are so horrible for me yet I love them, It usually takes up to a whole day to get my sugars back into a good range..