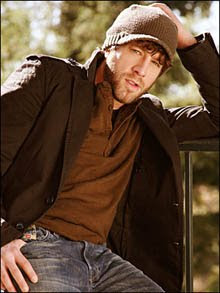 Elliott Yamin was on American Idol a few years ago. He was one of my favorites and he finished third. He is also a Type 1 diabetic. I know a lot of people talk about how American Idol uses the back story to promote different people. Some people like it, some don't. You would think that having diabetes would make for a great story. But I don't recall hearing about Elliott having diabetes until almost the end of the season. And I watched EVERY EPISODE. He had already become one of my favorites, but after hearing that we had diabetes in common, it quickly sealed my love for Elliott.

He has worked some with JDRF that I know about and I'm sure he's done other things in relation to diabetes.

Last night I found out that Elliott was in Chile when the 8.8 earthquake hit. I read about it on some news site (I don't remember which). I immediately went to his Twitter feed. I found out that he had been tweeting consistently since the earthquake and was doing some interviews with different media outlets.

I also found out that he was running low on insulin. Very low. He stated on his twitter account that they had only planned to be in Chile through Sunday and that he hadn't brought much more insulin than that. (He has been traveling quite a bit in the past weeks, all over the globe.)

The thought that Elliott (or anyone for that matter) would be caught in situation like that brought fear to my heart.

Two different times he Tweeted about being low on insulin. Then, earlier today, he tweeted an SOS message asking media people who were traveling out of the country if there was any way he could go with them since he was running so low in insulin. Again, I was scared for him.

He tweeted that they were telling him they could leave Wednesday. Then Friday. Then they weren't sure.

All I could think was that if he was running that low on insulin, he wouldn't make it to Wednesday or Friday.

Just a little while ago (around 5 CST), he tweeted that he was now doing okay on insulin and there was no need to worry.

I sighed in relief.

Knowing he had insulin made me a little more calm

I wish Elliott a safe rest of his time in Chile, and a safe and speedy trip back to the States.

Statement: Never yell at me for packing waaaaayyyy too much stuff when I got on vacation. There's a reason I have a suitcase big enough for myself to fit in....
Posted by Cara at 5:30 PM

Oh, I understand your concern. It makes me so sad to think of all the PWDs who are worried about a whole different problem right now, that the world is probably pretty ignorant of. Glad Eliot is safe!

I understand your fear. It makes me so sad to think of all the people in the world who can not get the medical supplies they need. I freaked out yesterday because Daniel's pump ran out of insulin at school. I could not get to him. We have an awesome school nurse that I am so thankful for. This was preventable and fixable and I was close to meltdown, I can't even imagine when it is not preventable and fixable. We are praying for Elliott and all the other PWDs out there struggling to survive.

I'm so glad he's okay! How scary. Your x3 rule is great advice. Reminds me of when my husband and I had to evacuate on a moment's notice from the little house we were renting in Beaumont, TX because Hurricane Rita was coming. We thought we'd be back in a just a few hours, but ended up not being able to come back for over 2 weeks! thank God I took his advice to take a couple of vials in a cooler with us (plus some extra pump supplies) "just in case"!

Kathy, that's what was so scary. That there are other people there, like him, who can't get what they need. And he's able to talk about it to the public. It reminds you that there are so many people out there effected by the aftermath, more than the event itself.
Vivian, right after I started pumping, I forgot my bag with all my pump supplies in Cookeville at a friend's. It was so scary. I met her half-way to pick it up.
Katie, I'm so scared of storms that any time we have a tornado warning, I grab a bag with a several weeks worth of supplies. Paranoid? Maybe. But you never know what's gonna happen.

It is scary. I always carry-on all of my supplies too, what happens when your bag gets lost!?!?!

Katie-Usually I have the largest carry-on they allow w/ all my d-supplies in it. And then I put extra in my suitcase. Plus, I have to have room for my 25 pairs of shoes in the suitcase too. ;)

I couldn't even imagine what that must be like, to be stranded somewhere without the meds we need to live.

I am so grateful that I am not in that situation, but I feel so sad for those who are.