In 1986, Ann M. Martin published her first books in The Baby-Sitters’ Club Series. There ended up being hundreds of them, along with spin-off series like Baby-Sitters Little Sister, Baby-Sitters’ Super Editions, and Baby-Sitters’ Mysteries. I had most of them.
At first publication, I was only 5 years old. This was the year that I was diagnosed with diabetes. I didn’t read those books at first. But I remember getting my first boxed set of The Baby-Sitter’s Club books when I was around 6 or 7. I didn’t read them at first. I tried, but I think I was too young. They sat in my bedroom for a while. But by the time I was 8 or so, I was ready to read them. And read them I did. Kristy, Mary Ann, Claudia and Stacey became my friends. Later, Dawn, Jessie, Mallory and others joined the group. Each had their own quirky qualities. I related to each of them on some level.
But my favorite baby-sitter? Stacey. Always. Stacey had diabetes. Yup, she was a “juvenile diabetic”. And she was the only one I knew. I read those baby-sitters book until I was in high school. Even though I had out-grown them, I still wanted to read about them. I wanted to know what was happening in their lives. 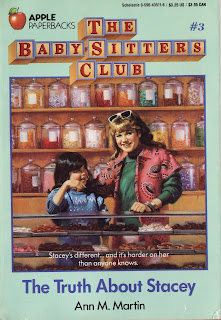 One thing I loved about Stacey was that she never let diabetes keep her down. There were books that she did get sick. One, in particular, that I remember she started sneaking sweets and not giving insulin. She ended up in the hospital, successfully scaring her friends and her parents to death.
Oh, and Stacey and I shared a middle name. And she was originally from New York City (could that be where my obsession with the city started?). Random facts, but stuff that I remember and loved about Stacey.
I, of course, ended up with first release copies of most of The Baby-Sitters’ Club books. I ended up getting a boxed set of the first 4 or 5 book when I was around 6 or 7. At the time, they were just too much for me to read. They were chapter books. But by the time I'd hit 8ish, I was devouring them like crazy. At one point, I even made my mom enroll me in the mail order club so I could get the books as they came out (and cool other stuff too, like stickers, and bookmarks, and trading cards....I was such an 80s kid).
Even as a kid, I knew that Stacey's diabetes was somewhat mis-portrayed in the books. She was often referred to as a "brittle diabetic" (I won't get into my thoughts on that term...) and she was not able to eat a lot of different foods (sugary foods being at the top of the list). But, when these books were written, things were very different. The year of my diagnosis (and the publication of the books), 1986, was a very different time in diabetes treatment. But as the years went by, the books never really advanced, as far as Stacey's diabetes went.
They did another release years later. I never read the re-release versions of the earlier books, simply picking up on the new books as they came out, so I don't know if they changed anything in the first books that went into detail about Stacey's diabetes. 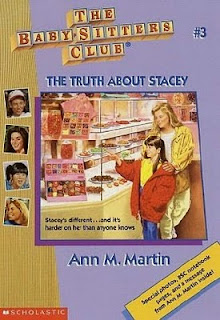 I think I quit reading the series sometime toward the end of high school. By that time I had advanced in my reading, obviously, but couldn't part with my dear friends in the Baby-Sitters' Club.
I think the books went through a lag period in sales, and Ann M. Martin starting writing some of the books in a new series (kind of a spin-off of the Baby-Sitters' Club). But when I was in college, I noticed that there was a final Baby-Sitters' Club book on sale at Wal-Mart. It was to be the last one ever. I bought it. It celebrated the Club members graduating middle school and moving on to high school. And it was a closure for me, in a way. Sure, the books would always be around. But they had gone on in my mind. They weren't The Baby-Sitters' Club anymore. They had grown up.
I actually hadn't thought about the books in quite sometime. Although, I'm sure if you asked, I could have quoted any of a million random facts about the characters. Then, last weekend, I was in Wal-Mart killing time before heading to a play, when I saw a book with a huge cupcake on the front.
I had to look. I mean, you guys know how I feel about cupcakes. :) And there on the cover were the words "The Baby-Sitters' Club: The Truth About Stacey". 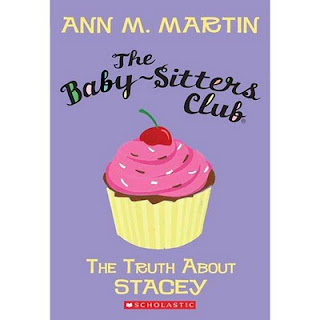 I immediately picked it up. Apparently they are re-releasing the series again. Slightly modernized (kids don't really get perms anymore, and they have modern technology) of course. But I knew by the title, that this was the first "Stacey" book in the series. And I wanted to see if they'd updated anything about Stacey's diabetes. So I bought it.
I knocked it out fairly quickly and was both pleased, and disappointed. The story overall, is exactly as I remember it. The characters are the same. But, Stacey's diabetes remains virtually unchanged. It's vague at best. They talk about her diagnosis (symptoms and the hospital and having to take shots). They talk about controlling her diabetes with insulin and diet. But, again, the story is presented that Stacey can't have refined sugar or junk food. I wasn't too terribly disturbed with that, but later in the story, Stacey returns to New York for a doctor's appointment (her parents are doctor shopping, looking for a "cure") and they stay with friends. During that visit, there is a mention of Stacey keeping her insulin pump out of site.
My first reaction was joy that they mentioned an insulin pump. My second was confusion. Because, up to that point in the story (and it's nearly the end, by this point), there is never a mention made of an insulin pump. Only injections. This could be very confusing for someone who knows nothing of diabetes.
Overall, it makes me want to read the other re-released books, just to see if they address the subject more in depth. Or maybe it's just my nostalgia kicking in. I'm not sure.
Would I recommend this book? Well, I'd say if you were a lover of The Baby-Sitters' Club series as a kid, then go for it. If you are looking for something to share with your kids to actually teach them about diabetes, I'd say get another book.
But Stacey's still my favorite. And she always will be. :)
Posted by Cara at 7:00 AM

Cara,
I love reading your blog. I find that so often I am able to shake my head along with you and say "yeah I totally agree!". Keep up the great work and thanks for sharing with everyone.
Amanda S.

Thanks for commenting. :) I appreciate it. It let's me know someone's reading! :)

Great post! I was in Borders the other day and had to resist the temptation of buying that same book! I read the series in grade school, not sure when I stopped but I remember stalking B.Dalton (the mall bookstore) when I thought new ones would be available. I wasn't diagnosed (Type 1) until I was 33 (2008) and up until that point, my only diabetes knowledge came from that series. Although it sounds a little odd to say grateful in the same sentence with diabetes, I am most grateful that I was diagnosed with the D in the 2000s when we have such fabulous gadgets as Insulin Pumps and CGMs. And that I was an adult rather than a kid.

Fiona - They came out once a month. Usually 2 at a time (a reg and a special of somesort). And I would make my dad by them for me when I was with him for visitation. :)

As soon as I saw the title of this post, I thought "Stacey!"

I loved Stacey, but I wanted to be Claudia.

Love the cheesy "We're in a dangerous candy store" illustrations.

Totally rereading this. Thanks for bringing back the memories!

Also! Do you remember when they updated "Are You There God? It's Me, Margaret" a couple of years ago?

There was a big uproar because they replaced the mentions of belts and sanitary napkins with pads.

Jacquie- I didn't hear about that one! I'll have to see if I can't find the "updated" version.
Oh, and I think that "dangerous candy store" think is hilarious. That part of the story in the book made me want to laugh my head off.

I love your post! This brought back so many memories! I believe I have a huge collection of them in a box in my parent's basement. Next time I'm visiting, you can bet I'll be searching through that box!

I have just stumbled across your blog. We had these books in the UK also!! Ah memories ha ha

I never read any of the Baby-Sitter books - I'm a "little bit" older than you and I was a Nancy Drew girl. :) But I'm as disappointed as you are that they didn't update the books to reflect an accurate portrayal of diabetes. I wonder if the media will ever get it right. And I also wonder how many other diseases they spread misinformation about, and I don't catch it because I don't have the knowledge to understand that they are getting it all wrong.

You know, I have never read any of the baby sitting books - but I think you'll grant me a pass on that, right?

Nevertheless, I think it's pretty cool that Stacey had diabetes, and that it wasn't *terribly* misrepresented.