So, I've not really been baking much of late. I haven't had anyone to really bake for. I've made a few tasty cakes (not the decorating kind, just the kind you eat for fun). But nothing worth photographing. But in the next couple of months I have several things on the list. So, be ready for more pictures. :)

One of my oldest friends (we met the 1st day of kindergarten!) is having her second child in November. A little boy is going to be joining their family. This will make 2 boys for her and her husband. I joked with her that at least she knows what she's got to expect this time. :)
The let their older song pick the theme for the baby's room. And having just seen Toy Story 3, that's what ended up going as the theme for new little brother's room.
This has bleeded over into the baby shower. I'm throwing the baby shower and Toy Story seems to be the choice. Well, let me tell you, you can find lots and lots of birthday stuff online for Toy Story. But no one has apparently ever thought to throw a Toy Story baby shower. So, I'm improvising. :)
That being said, I'm getting ready to venture into a side of baking that I've never entered into before. Cake Pops. I first discovered cake pops through Bakerella's website. If you like baking (of any kind) in the least little bit, you'll love her website. She has step-by-step (with pictures!) directions and recipes on her site and she has give-aways all the time.
I'd never been brave enough to try to make cake pops. But her website gave me some inspiration that I think I might need to try. These: 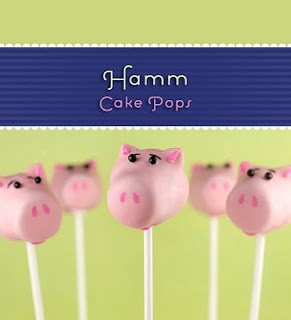 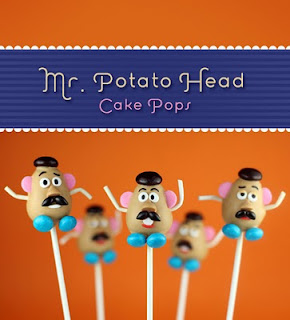 Aren't they the cutest? I'm thinking for party-favors for the baby shower. But believe me, I'll be making a practice batch or two before the actual shower. Lots of details and I don't want to mess it up. :) Wish me luck everyone. And I'll post actual pictures after the shower (in early October).
Posted by Cara at 7:30 AM

I think you should make a Big Baby cake, too, just to freak everyone out. It fits the baby shower theme, right?

I haven't been brave enough to make Cake Pops, but I did make their simpler first cousin, Cake Balls and OMG, they were fabulous (I love Bakerella!!). I used Funfetti cake mix, Buttercream frosting, and Wilton Candy Melts that were white with little speckles. Heck, they were delicious even without the coating. I can attest to this personally as I ate 7 of them that way to treat a low and then had to scramble to calculate the carbs/insulin to head off my *ahem* overcorrection. Great choice!

Those look awesome!!! I can't wait to see your finished products. (And the test batch.) :)

so cute!! Good luck Cara, you are so talented that you don't need it though :)

Those cake pops are so cute! Can't wait to see a photo of how they turned out.

Let me suggest you dip the lollipop sticks into the melted candy coating before you stick them into the cake balls. This will help them stay up on the stick and not slide down. Get a piece of florists foam to stick them into while they harden. I make cake balls all the time but the pops are trickier! Good luck!