Much Catching Up To Do!

I have not been blogging regularly. Basically, I've had so much stuff going on, that I've not had time. Even tonight, I am putting stuff off, just so I can blog. I miss you guys! And I miss blogging.
So it's catch up time.
1) Two weeks ago, I met with some other adult type 1 diabetics in Nashville. There were 7 of us that showed up to have lunch at a great little restaurant called The Yellow Porch. The food was fantastic. I was the only one who didn't live in the Nashville area (it's about a 2 hour drive for me), but it was nice. And it's probably going to be a monthly thing. I don't know that I can always make the trip, but I can go sometimes. And as you guys know, it's nice to be around others with diabetes.
If anyone is in the Nashville area, let me know and I'll get you the info on our next meeting.
2) I spent an entire week without my sensor on. But MiniMed came through for me. They not only got the approval, instead of waiting on the letter, they agreed to overnight me my sensor order. I should get my new box of sensors tomorrow. And the letter they needed was faxed to them today, after they had already agreed to release my order.
Someday I will get into an entire blog post on how wonderful MiniMed is. I won't do it today, but when I do, expect a short novel. You just don't get customer service like that anymore.
3) I spent last weekend in the D.C. area with my friend and my adorable godson. It was a nice trip. I left on Friday and didn't have to be back until Monday night (gotta love state holidays).

During my trip, we spent waaayyyy too much time eating. No lie. My diet (sorry Biggest Loser gang!) went out the window for the weekend.
4)On Valentine's Day, we got together with some other friends of Amanda's and had dinner at a fantastic restaurant called The Melting Pot. I had never had fondue before, so it was an experience. And the food was amazing! I loved it. Not to mention it gave me an excuse to get all dressed up. 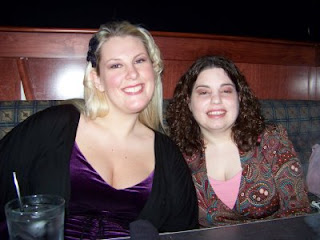 5)Sunday morning I met up with Heidi, fellow blogger, from The D-Log Cabin. :) I love meeting fellow bloggers. It's so fun! We met at a place called Eggspectations and had wonderful omelets and chatted away. I'm going back up in May, so I'm hoping to get together with Heidi again and maybe some other fellow bloggers in the area. It would be fun to get several of us together to have lunch and hang out. Not to mention, so much fun to blog about. 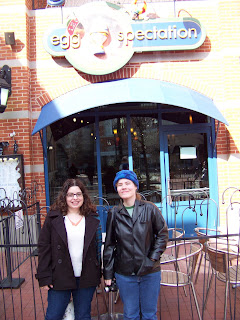 Pretty much the rest of Sunday was spent watching movies, napping, and making cupcakes. :)
6)Monday morning, we headed back to Baltimore (this is where I flew into and out of) early.
The first thing we did when we got there was go stake out Charm City Cakes, home of Duff from Ace of Cakes. We took pictures in front of the building. You can't go in. It's only by appointment. And there is black on all the windows. But it was still pretty cool. I stood in front of Charm City Cakes! **Eeeekkkkkkk!!!!!!** 7)Then there was a restaurant that Amanda wanted to take me to called The Blue Moon Cafe. Since there is no website, I have just linked you to some reviews. Basically, it's a little hole in the wall. Very small, very packed. The wait was around 45 minutes. But when we got in, it was oh so worth it. They make Captain Crunch French Toast. Yup, you read that right. I don't know how they do it, but it is THE most fantastic thing I've ever had in my entire life. Homemade bread, no need for butter or syrup. And also I guesstimated around 110 carbs. I was so full when I left there that I only ate some cheese and crackers for the rest of the day.
Now, folks, I am spending this week working on a baby shower cake/cupcakes, so I have very little time. But I will blog again next week. Really.
Posted by Cara at 6:11 PM

Your friend picks the best restaurants..those other two sound really good.Maybe she already has more possibilities in mind for May?:-)
Here's to May and warmer weather!

PLEASE keep me posted on when you're coming to D.C. I will TOTALLY come down and see you!!! I love D.C. and meeting new bloggers, so the fact I could do both at one time, like, woah! There are a few other area bloggers I might be able to wrangle up as well. :-)

Heidi-She always has the best ideas. She'll have some great ones I'm sure.
Allison-I'm coming the weekend of Memorial Day and staying through that Wednesday after. :) Come visit!
Lora-I love Duff! :D

Very cool that you got to meet up with all those folks!