Back in May, when I was on my yearly trip to New York, I got to see A Little Night Music. At the time I saw it, the 2 leading ladies were Catherine Zeta-Jones and Angela Lansbury. After I saw it, Bernadette Peters and Elaine Stritch took over those roles. I'm sad to say that I won't have the chance to see the show with the new cast before it closes in January, but I still enjoy reading about the 2 new leading ladies. I've been a Bernadette Peters fan for most of my life (hello, people... she was in Annie!). But, having not followed Broadway until I was older, Elaine Stritch is a new person in my fan world. 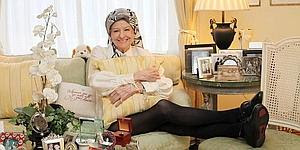 And boy does she deserve the fans. She's won 3 Emmys, a Tony... and too many other awards to count. Just yesterday I came across an article in the New York Post about Elaine Stritch. The title: Where Life is Suite.
The article was interesting. Apparently Elaine Stritch lives in the Carlyle Hotel in New York. Not temporarily. Full time. Kind of fun, huh? Kind of like Eloise...
But my questions came from a comment she made while talking about the hotel staff helping her out.
"I'm a brittle diabetic," Stritch says. "That's about as diabetic as you can be. But I don't have to be nervous. If my blood sugar acts crazy, I just pick up the phone. In a minute, they're here with orange juice or whatever I need. So I never feel alone."
That's where my question runs in.... Is she a Type 1 diabetic? Typically, that's what I assume when people say "brittle" (a term of which I am NOT a fan). When was she diagnosed? How old was she. Curiosity killed the cat. So I'm gonna be one dead cat. I'm on a mission to answer those questions for myself. We'll see how that works out. :)
Posted by Cara at 7:30 AM

She's definitely Type 1 and I believe she was diagnosed as an adult. (Which was still, you know, 30-40 years ago, hence the "brittle" terminology.)

She's a type 1 - I saw a special on PBS (might have been HBO) about her. She and her assistant have injection charts set up at her suite in the Carlise & in her dressing room at which ever theater she's performing at!
She's hysterical and uber talented!
She has a recurring role on 30ROCK as Jack's mother & she steals the show everytime she's on!
Kelly K

I saw on NY1 that she was insulin-dependent, which I presume means type 1. Still, it's kind of eccentric to live in a hotel, no matter how much clutter she wanted to get rid of. While the comfort of having hotel staff around is no doubt part of the reason, she could also have an apartment with a doorman or even a live-in assistant do those things, too.

You had me at "Annie". Annie is a fav at our house. Avery runs around singing it all the time. She wants us to video her "performances". We saw it at a dinner theater and she was so bummed that Annie could not come home to play!

I think the hotel's kinda cool!