In the D-OC, it has become easy to see that the Dexcom seems to be the CGM system of choice. I have the MiniMed system. When I first picked my pump, CGMS was so new that there wasn't even an integrated system yet. But it was coming. Within a few months it was to be released, so I went with it immediately in hopes that I'd be one of the first on CGMS. And I was lucky. Not only was I one of the first to be on MiniMed CGMS, MiniMed was extremely helpful in navigating the insurance system and I was approved the first time through (extremely rare at the time...and even now).
From the very beginning I have had good experience with my MiniMed CGMS. Each time the insurance had demanded reverification, MiniMed has been right on top of things. I have had great customer service experience with them.
On top of that, MiniMed CGMS has even saved my life a couple of times. I never had the various problems with the accuracy that most people have. Occasionally, I'll have a crappy sensor, but no where near as often as I've heard some people talk about. My accuracy is fairly good for the most part. Not perfect, but what CGMS system does?
My problems, for the most part, have been minor. I'd prefer louder alarms (for nighttime). And I wanted more predictor alarms. That's why, when I was searching for a new pump, and I found out about the Revel from MiniMed, I went with that one right away.
But then I was disappointed in the new system for alarming. I wrote a pretty detailed post when I had a scary night. With the changes in the alarming, the insulin pump didn't wake me up for WAY too long.
While I'm still pretty satisfied with the overall accuracy, and I don't have site problems (i.e. irritation, infection, etc.) for the most part, I have begun to wonder about the Dex and some of the benefits in changing systems. 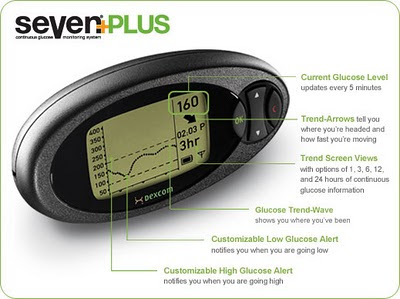 This is where I need help. I need some of my fellow D-OC members to help me answer some questions. To see if its worth the time and effort (and fighting the insurance company) to try to get a new system. I don't want to leave what I know is okay, if I'm not going to get way better. Does that make sense?
1.) Do the sensor and the receiver loose contact with each other often? I have noticed that if I don't wear my sensor and pump on the same side of my body, it will lose contact. Also, what about under covers at night. I often sleep with 2 or 3 blankets. Will this be an issue with the sensor and receiver communicating (I wear my CGMS on my upper thigh currently, so it would be completely covered up).
2.) Does the Dex give prediction alerts. i.e. Do you get alerts for rapidly rising or falling blood sugars, and do you get alerts when you are approaching your high or low limits (the MiniMed does this on the Revel).
3.) What happens if you don't turn the receiver off after an alert? Does it keep beeping? Does it beep louder? Does it vibrate?
4.) Do you have problems with leaving it places? One of the reasons I liked the MiniMed system so much is that its integrated and there's no chance of me leaving it somewhere. I tend to be a forgetful person. Not always. But I have been known to run off and leave my meter or my cell phone at home occasionally.
5.) How is the accuracy? If you've used both the MiniMed and the Dex, which do you find is more accurate? If you've only used Dex, are you satisfied with the accuracy?
6.) How difficult was it to get approved? Insurance. Can't live with it, can't live without it. :/
Posted by Cara at 7:30 AM

I'll try to answer the best I can:

1. I have noticed that the sensor and receiver do better when they are on the same side of each other, but as long as you're wearing it someone on your body it doesn't give me too much trouble. I have the most problems when I get near a computer that messes up the signal.

2. You get arrows on the display screen showing where you're headed, and you can set it to beep or vibrate when you're rising or falling. It won't tell you if you get near your limit, but won't go off until you actually reach your limit. But you can set your limits to be whatever you want, so if you want to stay under 200 mg/dL, then you can set your HIGH limit to 180-190 mg/dL.

3. I'm not entirely sure on this one because I'm pretty diligent about turning off the receive when it goes off. But I believe it keeps beeping every 5 minutes until you cancel/snooze it.

4. I have only left the receive home once, and I realized it half way to work. It's one of those things that you just have to get used to, like getting used to wearing the pump. But I do like that it's a separate system, because then I can leave it on my desk and keep an eye on it. If I had an MM CGM and was wearing a dress/skirt, then it would be harder to peek at it.

5. This is the main reason why I went with Dexcom first instead of MM, because I read that Dexcom was more accurate than MM and you could wear it longer (7 days as opposed to 3). It's more accurate the more "normal" you are; above 180 mg/dL you could have differences as much as 40-50 points. And I've noticed that the longer you wear it, the more accurate it is.

6. This was surprisingly easy for me, the stubborn peg in my process was my doctor for getting all my records. But Dexcom was great in being in my corner, calling my doctor for me, letting me know of the process all along. But MM also has impeccable customer service, too, so you'd be good with either one there.

I'll be anxious to learn the answers to these questions myself! Please plan a follow up post!

Hey Cara! I've been using the Dexcom since January.

1. Not often, no. You just need to be within about 5 feet of the receiver, and it's pretty good with range (it has even taken readings through walls for me before). Blankets are no problem, and neither is laying on your other side. The only issue I sometimes have is when I'm sleeping on it.

2. Yep. There is an alarm for rising, falling, and for low and high thresholds. Any of these are customizable in terms of BG level and sound/vibrate/off.

3. This is something you can also customize. It can beep every half hour, every hour, etc. When it's a low alarm, and you've got it on vibrate, it will transition to beeping eventually, if you've ignored it/slept through it.

4. I haven't had this problem, no. But that may be because I obsessively check it every few minutes. :)

5. I haven't used the MM so I can't compare - but overall, the accuracy is good. It depends on where I am in the life of the sensor (the longer I wear it, the more accurate it becomes), but I also realize that it's not a perfect technology, and it's just not going to be spot-on all of the time.

6. Dexcom did all of the legwork for me, as far as insurance coverage goes. I got lucky, and got approved the first time. I hope it's that easy for you!

I'm with Wendy, I'm interested to hear what people have to say too. Like you, I don't really have issues with my MM CGM - I've been really happy with it. But thoughts are starting to creep into my head that just because my MM CGM had been great doesn't mean the Dex wouldn't be even better. Thanks for asking these questions!!

I'm glad you've asked all these questions. I have the Minimed CGM, too, and daydream about the Dex quite a bit.

I think it's so hard for most of us because we've only had experience with one of the two systems.

1. For my DexCom/body they do not have to be on the same side. I leave it on my desk at work, in my purse when out and about, and somewhere in the bed with me at night. I hardly ever actually WEAR it and it keeps up with me just fine.

2. Yes. You can set up those alerts. There are alerts for: out of range, at your low threshold, high threshold, and you can set ones up for rate of change.

3. It will keep alarming. I currently have mine set up to vibrate first and then five minutes later if I haven't cleared the alert it starts beeping.

4. I have left it in my car once. I got it in September so I think that's pretty successful. :) And yes, I loose things a lot.

5. Very satisfied with the accuracy. Haven't used MM for more than a few day trial at CWD. I think that the Dex just makes it easier (with their design) to get the thing inserted right which means it is more likely to produce good results.

6. I had to wait a few years for my insurance to start approving CGMs for anyone. Once they did, I had no problems getting it.

Thank you for this post and for the answers. I am getting my Dex in December. I ordered it through Dexcom in October at the TCOYD conference and they were super helpful. They got it approved through my insurance within a few weeks. My only issue was I have an 80/20 plan so I have to drop about $300 for the meter and about $75/month for supplies. Boo!

I tried the MM one through a trial at my doctor's office. I'll let you know which I like better.

Hi Cara! I just started my Dexcom on Monday, 11/22. I can let you know my start up experience as well as my 1st 3 days.
1. The only time my sensor and receivor lost contact was while I was charging the receiver. It only took 2 hrs to charge. Charge lasts 2 to 3 days.
2. Alerts can be set for highs and lows. You can disable, or have vibrate or beep and vibrate. There is a low alarm for 55 mg/dl that is permanent. You can't disable it.
3. I haven't ignored an alarm up to this point. I will have to let you know on this one. Just had a high alarm due to pizza.
4. I worry that I will leave it. But so far no problem. I am up and down a lot at work moving constantly so I keep my receiver in my pocket. But i have only worked one day with it.
5. So far very accurate. Largest discrepancy with my meter has been about 20 pts.
5. Insurance denied my request for MiniMed. But I was approved the 1st time with Dexcom. When I asked the dexcom rep. She stated "Dexcom is a CGMS company. MiniMed is a pump company that does CGMS." Ok I will let you ponder that statement as well. I have had a great experience with Dexcom, from insurance approval to education to calling customer service yesterday. Everyone was helpful. With Minimed, I always had to call my rep and each time it was someone new. Good luck