I am a person who tends to like things to stay the same. I hate to move. I hate things to be "sprung" on me. I like plans. I tend to eat the same things every time I go out to eat (although that might have something to do with knowing what certain foods do to my blood sugars...).

But, I do like all different kinds of thing. Routine is good. Pigeonhole-ing yourself is not.

I like all kinds of movies. Comedy, drama, action, teen-flicks, musicals.

I also like all kinds of music. I've written before about my love of music. I have very eclectic tastes.

Last night the Grammy's were on TV. I usually like to watch award shows because they give me a chance to see live performances that I'd otherwise not have a chance to see. I was, however, hanging out on Twitter while the show was on. It hurt me and disturbed me to no end how terribly unforgiving and judgemental that people were of different performances, artists, and songs.

I don't like all music. I'm not a fan of every artist. But talent comes in many forms. And I've always lived by the whole "If you can't say something nice, don't say anything at all" mantra. I respect people's opinions, don't get me wrong. If you don't like county/rock/rap/pop/show tunes/whatever...it's your right not to like it. That's okay. I respect that.

But the bashing of an artist because you a) don't know who they are or b) don't like the genre of music they sing is NOT cool. I can promise you they love what music they are performing. And when you love something, you put 100% into it.

It is true that some performances are just flat out bad. I've seen it. I've even said "that was NOT good." It just seemed to me that people online were doling out judgements before ever even giving the performers a chance. My idea of a bad performance is one where they aren't on key, screw up the words, aren't on beat, etc. Not just that I didn't like the song or music.

That being said, I loved watching the Grammy's last night. There were some beautiful performances. Some of them will be YouTube worthy, no doubt. On in particular was the performance of Green Day with the cast of the soon-to-open Broadway show American Idiot. Obviously, all the music in the show is Green Day music. :) (Oh, and by the way, I'm not a huge fan of Green Day. But I liked this performance. And I plan on seeing the Broadway show with a friend of mine later this year.)

Also, I can assure you, all my lovely readers, that I wasn't mad per-say. Just disturbed at how cruel people can be in general. And, I typically don't get all "political" about things as I don't like to push buttons and I certainly don't like to fight about stuff. But I needed a place to vent and also to encourage people to try new things. Being open to new experiences is a good thing. I think it makes us better people. And more understanding people.
Posted by Cara at 9:29 PM 1 comment:

The Tennessee version of a snow storm: 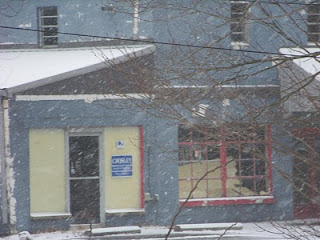 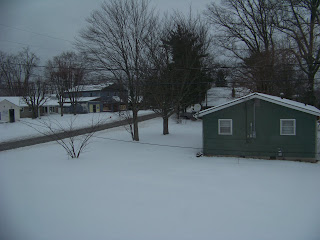 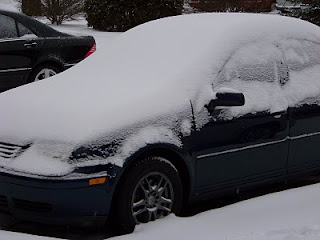 Today I'm gonna mix a little music and a little diabetes. :) Since it's my designated Music Monday, I figured I'd get 2 in one.
Earlier today Allison blogged about the choice of words. Basically, how we see ourselves as diabetics (or people with diabetes). Her question was "Suffering from, or living with?" I whole-heartedly believe that I live with diabetes. In my comment on her blog, I compared it to a crappy roommate you can't get rid of because of the lease. Some days are easier to live with the roommate than others. She pointed out that she didn't sign a lease and that she preferred to look at it like an annoying little brother. I think I like her analogy better than mine.
I got my analogy from the only bad living situation I ever had, which was a crappy roommate. Both my siblings are so far away from me in age there's not a lot of "annoying sibling" stuff in my life. We won't ask Allison how she relates to her "little brother" analogy. ;)
Allison is right though. None of us signed a lease. We just got stuck with it. And we live with it the best way we know how.
I do think, however, that our attitudes have everything to do with what category we fall into. To me, one who "suffers" from diabetes is letting diabetes have the upper hand. One who "lives with" diabetes has found a way to co-habitate. I think a lot of us in the D-OC have become people who "live with" diabetes. I won't say all, because there are always the exception to the rule, but I think the D-OC has helped me, and probably a lot of you, pick the more positive category.
No matter how much that little brother known as diabetes may annoy us, and drive us up the wall, deep down we can still appreciate it. Maybe not love diabetes, but was can love what diabetes has given us. For me, diabetes has given me a world of online friends and a wonderful support system. It has given me strength in ways I'm not sure I ever would have had on my own. And diabetes is just as much a part of my life as my big brother or my little sister...the only difference is that diabetes is slightly more annoying. :P
Now for the music....and come to think of it, the theater connection to my post. There's a song that was in The Little Mermaid on Broadway (which I was lucky enough to get to see on my last trip to the Big Apple) that was sung by Scuttle the Seagull. It's called Positoovity. And that's what I want to have. Positoovity about diabetes. Positoovity about life. Yes, the song's silly. But I think, just like a silly song, that our attitude's have everything to do with how we live our lives, with or without diabetes.

After careful consideration, I deleted one of my former posts today. It was titled Dr. Bernstein and was originally posted 11/27/07. It was one of my most commented on posts. There were 14 approved comments on that post when I checked today.
I had mentioned a few weeks ago, that I was dealing with a lot of spam comments on my blog lately. It had gotten to the point that it was literally driving me up the wall. I started to keep track of which posts the spam comments were going to and I discovered that a vast majority of them were on the Dr. Bernstein post. Because of this, I decided to delete the post.
I think it's sad that I should have to delete one of my most popular (controversial, but popular) posts just to try to ward off the spammers.
However, I'm hoping that by removing the most spammed post, I'll cut down on the comments. Let's all cross our fingers and hope I'm right, okay? :)
I'll be posting later on this week. And, if it goes according to plan, it will be another theatre post.
Hope you all have a fantastic week!
Posted by Cara at 9:53 PM 3 comments: