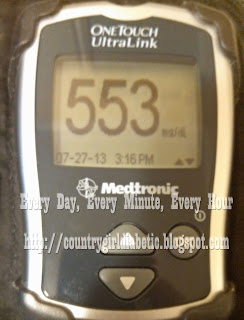 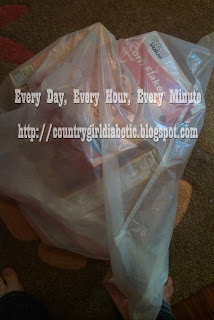 *I did NOT write this to make light of those suffering from actual addiction issues. As a person who knows and loves several different people who are recovering (or still) addicts, I encourage anyone dealing with these issues to seek help.*
Posted by Cara at 7:57 PM 7 comments:

The recommended range for blood sugar for a person with diabetes is 80-120. Some people say 70-130. Either way, these are ranges we should be shooting for our blood sugars to be a majority of the time. Anytime you deal with insulin (and food/stress/illness/other medications/the weather/the house that venus is currently in) blood sugar levels of a T1 diabetic is going to be outside of those ranges at times. But most of us strive to keep as tight of control as possible for our health.

Blood sugar levels that are out of control can cause major problems. In the immediate it can cause death, and in the long term it can cause complications which lead to death. And most of us don’t have a death wish. We want to live a healthy and as long as possible.

I’ve had T1 diabetes since February 5, 1986. It was a few months before my 5th birthday. I was practically a baby. And I was struck with this disease because my body decided to attack the insulin producing cells in my pancreas. Because of that my parents had to give me insulin injections, monitor what I ate, and test my blood sugar many times a day.

As time progressed I grew up. I learned to drive. I moved away to college. I’ve gotten a job. I’ve purchased a house. I’ve traveled the country with friends (and even sometimes alone). These are all things that a person without diabetes could do and no one would think twice about it. People living with diabetes do these things regularly and while some people may think nothing about it, our friends and family know the truth. Living alone, traveling, driving a vehicle, getting married, having children, and many other activities that are “normal” for most, take way more energy thought and planning for those of us living with diabetes.

Where is all of this going? Nearly every decision I make involves a number. My blood sugar number. Insulin keeps me alive. But it has the ability to kill me as well. Too much, or too little, insulin can lead to serious sickness and even death. This means I have to know how much insulin to take. How much insulin I take is determined by a lot of scientific math….and my blood sugar number.

Let’s just say my blood sugar is 120. This is good…right? It could be. But it could also depend on if I have “insulin on board” (this is insulin still working actively in my system), if I’ve just eaten, if I just completed exercise, if I’m getting ready to do exercise…among other things.

That’s a lot of variables, isn’t it? Think that’s bad enough? Try this:

Back to the beginning. My blood sugar reading says I’m 120. I’m getting ready to go on a road trip. It’s going to be several hours of driving for me. I am going to eat, right now. Forty-five grams of carbs. This means I’m going to give (hypothetically) 6.4 units of insulin for the food. And according to my goal blood sugar of 100, it also means an extra 0.5 units for the 20 points my blood sugar is over 100. So… 6.9 units of insulin, food, and driving.

Hypothetically this would work perfectly. But what if my meter reading was wrong. What if my blood sugar was actually 80, instead of 120? With the food and the insulin I took, a low blood sugar might not happen right away, but when my insulin peaks and my food is gone, that extra 0.5 units of insulin I took for that 20 points I was over 100….could drop me as much at 30-50 points. Which means an 80 could eventually be a 30 or a 20.

If I wasn’t passed out with a blood sugar of 20 or 30, I could be. If I didn’t catch the low blood sugar, it could be disastrous. To me, to other drivers, to people in the vehicle with me.

And 80 instead of a 120? That’s a 40 point variance. It could be enough to kill someone. Yet current FDA guidelines have a 20% ± variance. That means my 100 could be 120 or 80. And even worse than that? The FDA enforces these guidelines before the strips can hit the market…but they do NO enforcement after they are being manufactured. Which means even though a company may be able to meet the guidelines the FDA requires (even though they aren’t really strict enough) before they hit the market, they don’t have to meet them after they being manufacturing. There’s no monitoring to ensure that they are sticking to the guidelines at all.

This is a serious problem. I believe that there are lives that are hanging in the balance. I believe there are people who could very well die from this. If a medication was hitting the market and causing a huge risk of death to the people taking it, the FDA would step in and put a stop to it. Lawyers would have infomercials on at midnight telling you to call them if you took it so that they could help you sue the company.

I’m not sure what the reasoning is. It seems quite ludicrous to me. But it’s happening. And we need to do something about it. If we stand up and say something. If we show examples of the danger and the immediate risk. If we raise our voices, perhaps someone will listen.

I don’t want to go to sleep one night, thinking my blood sugar is fine, and not wake up the next morning. I don’t want to do that to my friends or my family. I don’t want to break their hearts in that way. I don’t want the hearts of other friends, family, and loved ones to break if they lose someone to diabetes if there’s any way it could have been avoided. I’m standing up and raising my voice for myself and for others living with diabetes. We DESERVE accuracy. There are enough variances in diabetes without worrying if our test strips are giving us accurate results as well. 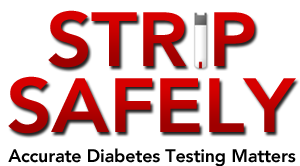 For more information on Strip Safely, an inititive to improve strip safety and accuracy, go to their website. They also help tell you how YOU can make your voice heard. This post is my July entry in the DSMA Blog Carnival.  If you’d like to participate too, you can get all of the information at http://diabetessocmed.com/2013/july-dsma-blog-carnival-3/.
Posted by Cara at 3:21 PM 1 comment: