Even though I’ve been slightly detached from the diabetes online community in the past several weeks, I’ve seen some talk about the petition going around that seeks support to have the names of T1 & T2 diabetes changed. This grabbed my attention almost immediately. I started searching around on the different posts that people were putting up, and even received an email from the women behind the movement and I read it as well.

I did some research, though for the most part I’ve been fairly quiet about it. Others in the D-OC have done a much better job writing about this and stating their opinions, but I wanted to state my own. It’s simple. And it’s nothing that hasn’t already been said. But I feel like I should say it from ME. I want my words on this.

First off, I was diagnosed with diabetes in 1986. I was just a few months shy of my fifth birthday. It was called “juvenile diabetes.” The pediatric endocrinologist that I saw told my parents that my pancreas probably hadn’t worked well from the time I was born, but I hadn’t been big enough for diabetes to show up yet. He also had me on one injection of NPH insulin per day. Barely 6 months later I had my tonsils taken out (due to chronic illness). My hospital records at the time show my a1c was 12.6 and in those records it stated “diabetes is finally stable enough to perform tonsillectomy.”

Just in reading the above, if you know much about T1 diabetes, you will see about a million things wrong with that. I was sick a LOT as a child (a result of being a preemie). My guess is that one of my many bouts with strep throat triggered the deadly attack on my beat cells, resulting in my diabetes. We all know an a1c of 12.1 is far from stable and that, even in 1986, one injection of NPH per day wouldn’t cut it.

Knowledge was different. Education was different. And even now, I feel like my own education about diabetes is constantly evolving. It was only a few years ago, I am ashamed to say, that I even mentioned about a name change. The conversation started somewhere online and I said, “Heck, yeah!” But I was wrong. I’ll admit when I am.

I am not skinny. If I told a random person I had diabetes, it would be very easy for them to look at me and say, “If you’d lose weight, you’d be cured!” In fact, I even had a “health coach” tell me I could come off insulin if I lost weight….and she had my paperwork in front of her with my T1 diagnosis on it.

The truth is…I feel like this name change petition is an attack against T2 patients. And I don’t like it. People with diabetes live with a HUGE amount of guilt, no matter what type of diabetes they have or when they were diagnosed. I think T2 patients often get even more of this guilt piled on them by the media and even their medical team.

Would I love to have the media, the general public, etc know that I have diabetes caused by an auto-immune attack on my beta cells when I was a kid? Sure. But making them understand that isn’t about changing the name of the disease. It’s about educating people about diabetes and the different types there are. It’s about educating people that just because someone is overweight, doesn’t mean they could “eat less/diet/exercise” and make said diabetes “go away.” It’s about educating them that just because someone is thin or athletic doesn’t mean that they have “the bad type” of diabetes.

Diabetes is an extremely complex disease with extremely complex treatments and extremely complex emotional issues that come along with living with a chronic illness “every day, every hour, every minute.” We do NOT need to place something else that will ultimately cause more division, more confusion, and more discord. We should be pulling together as a community and advocating for more research, better technology, better treatment, and more education for the general public.

I know I’ve only said what others have said. But that’s just my opinion and I really felt the need to write about it….and that’s what a blog is for, right?

I missed it again. I seem to miss it every year. Yesterday my blog turned six years old. I have a hard time wrapping my head around that. Six years is a long time to keep something up. I'll admit, my blog and I have had our ups and downs. In fact, the past month or so, we've barely communicated. But I always know that my blog is there when I need it. Something to pour out my frustrations and my triumphs. Something to share a fun story with.

And in return, it gets to you. I've accomplished so much and met so many people since I started blogging. I've done things I never would have done, if it weren't for that day that I sat down and created the blog that essentially changed my life.

Diabetes isn't the best part of my life. But it also isn't the worst. And diabetes brought me to blogging, which brought me to some of the best friends I have. All of which I wouldn't know otherwise.

I love that I've made so many friends, been so many places, shared so many stories, and had so many experiences because I started blogging.

And be assured, just because I've not been writing much doesn't mean I'm abandoning my blog. Just taking some time to focus on other things in my life. 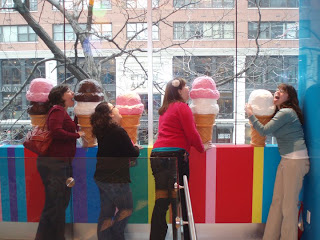 Tonight I think I'll have some ice cream to celebrate six years and one day of blogging.

Happy blogaversary to me!
Posted by Cara at 5:18 PM 6 comments: