Steel Magnolias. This movie and/or play is often a source of debate in the Diabetes Online Community. Some people love the show. Others hate it for its ending and somewhat inaccurate portrayal of life with Type 1 diabetes can be. I personally fall in to the “love it” camp, while my mother hangs to the other side. She’s always told me that the thought of anything happening to me, her Type 1 daughter, made the movie too difficult for her to watch.

My love of theatre has let me to a couple of different productions of the play, most notably the Broadway production from 2005 starring Delta Burke and Christine Ebersole. I was recently made aware of a staged reading of Steel Magnolias at which all proceeds would go to benefit JDRF. Like anything that involves theatre, I was intrigued. Add in the diabetes connection and I got excited.

After doing a little research on producer David Youse and his Four Things Productions, I found that Four Things has a pretty successful history of production to raise money for charity, including a staged reading of The Normal Heart that eventually made its way to Broadway. I decided to email the producer back and request an interview. Mr. David Youse was very much willing to help out, wanting to get word out about this production, in order to raise the most money as possible for JDRF. 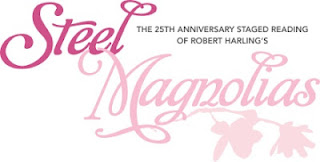 First of all, I’d like to thank you for taking the time to chat with me about this production of Steel Magnolias and about the work that you are doing at Four Things Productions. Can you tell us a little bit about Four Things Productions and what you do?
Four Things Productions is committed to raising money for various non-profits by presenting theater events with wonderful actors. I try to pick one play and one charity, per year, and raise awareness and the most funds, that I can.
How do you pick the organizations that you choose to donate your proceeds to? Do you have connections to Type 1 diabetes? What brought you to JDRF?
The process can be different each time. Sometimes I think of which play to produce first, one that I think an audience would like to see. Then I find a charity that equals what the plays is about. The Normal Heart would be an AIDS related charity. Steel Magnolias-Diabetes. My mother was a Type 1 diabetic so I'm very familiar with the disease and have that personal connection to it. Playwright Robert Harling and I both decided that JDRF would be our pick, since the funds go to research. We looked at other charities, but felt that JDRF was one that we connected with, because of what they do.
Did you choose to produce Steel Magnolias first, and then pick JDRF as your organization? Or was it JDRF that came before Steel Magnolias?
After the success of The Normal Heart, I realized that the 25th Anniversary of Magnolias was coming up. Knowing the play, I knew that I wanted to present it for a diabetic cause.
You have managed to put together an amazing talented and well known cast and  two-time Tony winner Judith Ivey is directing your production. How was this group of women put together, and are you aware of any personal connections to Type 1 diabetes that might have drawn these women to the project?
Robert Harling [playwright] and I met about two years ago, first, on this project. I asked him who is dream cast would be, 25 years later. Names, names, names kept coming up. Then when you bring on board the brilliant Judith Ivey, she has her vision and the director will take the lead. The three of us come together to discuss who would be great for which role and you want to cast it with the women who you know will connect on stage. This is truly an ensemble piece so each character has to be carefully thought of. Of course I look to see if anyone is public about being a Type 1 diabetic, but what is on the internet is never the real answer. But everyone, it seems, has someone they know who suffers from diabetes.
For my readers who are not your typical “theatre people,” can you explain the difference between a staged- reading and a full production?
A staged reading is simply what is says, a reading of the play with very minimal movement. In a full production with sets, lighting, music, etc, the vision of the director will establish what they want to get across not only in the performances, but with the visual as well. In a staged reading, I believe it's a more powerful way to explore the writing and creating art for the individuals who are witnessing it. By simply reading the stage directions each audience member can create what the beauty shop looks like, what they are wearing and their mind can wonder on what they see. What is so remarkable about this process is that the person sitting next to you can have their own vision of what is happening. So, everyone can enjoy their own show, in their own minds and create for themselves what they are witnessing.
I must note that your staged reading of The Normal Heart, directed by Joel Grey, ended up making its way to New York where it was eventually produced on Broadway. Do you have any hopes of that happening with this production?
I never thought that The Normal Heart would end up making its way to Broadway. I never think that far in advance about a project. I believe that if you focus on why you're presenting the reading and who it's for, the world will take care of you. So, right now, I'm presenting The 25th Anniversary staged reading of Robert Harling's Steel Magnolias, directed by Judith Ivey, to benefit JDRF. After Los Angeles, we will be presenting it in New York on December 3rd, for JDRF, and after that, we can only see what happens.
Any last things you’d like to share with my readers?
Supporting theater, in any city, makes us more aware of others, their joys, their sorrows and it not only creates great conversation, it educates us on all of us. Support the arts when you can, and support a cause, which you are passionate about. I believe it will make us a better country. INFO AND TICKETS: www.steelmagnolias-25years.org Thank you, David Youse
Thank you again, for taking the time to answer some questions for me. I know that there are several people in our Diabetes Online Community that live in the Los Angeles area, and I hope that they get the chance to see the show. I know I would love to be there to see my support for diabetes research and my love of theatre meet on stage. Break a leg!

If you are in the Southern California area next weekend, please try to go see this production. It will be more than worth your money. The production will be at Broad Stage in Santa Monica, Califorinia, Saturday, September 9th, 2012 at 6:00 p.m.

Four Things productions can be found on facebook and the individual Twitter account for this production is located HERE. If you are in the area and get a chance to see the production, please let me know! I'd love to have you guest post about the play.
Posted by Cara at 9:05 PM

Excellent interview, Cara!! I wish we could both go see this - together. That would be awesome! But I'm so thankful for the work they are doing and the funds they will raise.