Over the weekend I attended the JDRF South Region Symposium in Nashville. I was so blessed to get to go and I have so many things to share. This was the first Symposium of it's kind that I've been to. And the first that Nashville and the South Region of JDRF has done. I'd personally like to see it become a regular thing. Let me tell you why....

When they announced this Symposium back in September, I knew right away that I had to go. Why? Well, one of the guest speakers was the D-OC's own Kerri Sparling. I wasn't about to let Kerri come to Tennessee and NOT go see her. Plus, I kind of wanted to see her around a bunch of people with Southern accents. ;)

I signed up to go with a dear friend of mine. She's not a blogger...or a tweeter, but she's on facebook and TuDiabetes and she occasionally guest blogs for me. Sherry is one of the kindest souls I know and I knew we would have so much fun.

When the weekend arrived, I was buzzing with excitement. I knew some other people I'd met before were coming. I also knew there were a few people that I'd never met IRL before that were going to be there. AND I knew there were new people to meet.

There were vendors set up when we were registering and getting settled in on Saturday morning. One of the good things about that was that I got to hold and play with the new t:slim insulin pump. I thought it was pretty awesome looking, and fun to play with. It also appeared to be more sturdy than I first imagined...though I guess the true trial would be how long it lasted (I'm tough on pumps).

Before we could even sit down to have lunch, I ran into some old Nashville area diabetes friends that I hadn't seen in a while. And I got to meet some bloggers and tweeters that I hadn't had the chance to meet yet, including Julie, Andrea, Holly of Arnold and Me & Aaron Jaffe (who I didn't know had a blog called Rep the Betes, until this weekend; shame on me!).

Seeing Victoria again was SO much fun. And I got to meet some awesome new friends like Stephanie, Madison, and Jordan (who had two blogs like I do! You can find her d blog HERE).

Honestly, the friend connections are always my favorite part of things like this, but there was also a host of fantastic information. Listening to Tom Brobson, National Director, Research Investment Opportunities for JDRF, shared his experience with the artificial pancrease trial, and shared some of the focus of JDRF.

One of my favorite quotes of the weekend (that Tom Brobson shared) was "Less Until None" in reference to JDRF working toward diabetes having less burden, being less invasive, having less complexity, and having less danger in our lives until there is no diabetes left. I like the sound of that. While I don't know that I expect a cure any time soon, the "less" stuff has a nice ring to it.

I attended both of Kerri's breakout sessions, and was thoroughly glad I did. The first was on Pregnancy & Parenting. While I'm not a parent, not pregnant, and not planning to be, I do think that pregnancy and parenthood are in my future somewhere. I wanted to know what she did and is doing to have a healthy pregnancy, and being healthy for her daughter. Kerri had an endo there also answering questions (turns out it was MY endo!!!), so there was medical advice, as well as Kerri's personal experience.

Kerri's other session was on T1 Diabetes in the "real" world. There was a whole room full of young people, older people, parents of children with d, people who'd been recently diagnosed. It was great to see everyone coming together and sharing stories. And just for reference, Kerri's talks sound exactly how she writes her blog posts. :)

Another session that I attended was on diabetes complications. It was a little depressing, but I liked some of the information I gained. I had mixed feelings about it, honestly. It wasn't what I was expecting, so I was a little disappointed. But at the same time, I found it very informing and I learned a lot, so I can't be TOO disappointed. 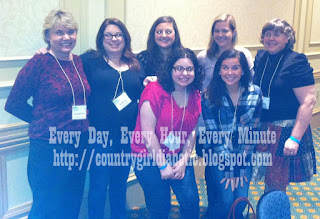 Overall, I thought the weekend was a rousing success and I really hope that JDRF continues to do things like this. While I understand that they like as much money as possible to go into funding research, there is a huge mental aspect to diabetes and this is one way to help. It goes right along with that "Less burden" part of the JDRF "Less Until More." Because things like this make diabetes less of a burden in my life.
Posted by Cara at 9:53 PM

Nice. Sounds like a great event. These kind of things are so important. I hope they do it again for you next year.

Sounds like a great time, Cara! And of course, now I just want to know about the experience of seeing Kerri surrounded by people with Southern accents... :))

Sounds like a great time! And thanks for connecting me to some great new people!