In true Carly Simon fashion, I have discovered I am vain. More so than I would have thought. And it bothers me.
I got my insulin pump 3 years ago in May. My warranty isn't up on my MiniMed 722 for over a year, but I have been curious about other insulin pumps. When I was offered a pump, the only two that I was shown were the MiniMed and the Animas insulin pumps. And my CDE pretty much told me that the one most people in this area get was the MiniMed.
I did look the information over carefully, and ultimately went with MiniMed because they were within months of releasing their CGMS system. That was of great interest to me and I figured it would be something I would eventually want to try. So, I ended up with the MinMed 722, and later joined the world of CGMS.
I'm happy with my pump. In fact, I don't have any problems with it to speak of. The CGMS is also great. My only complaint with that is the HUGE needle that I can SEE while I insert it (note to MinMed: Make your sensor inserter like the quick set. I don't wanna see the needle!).
More than likely, I will stick with MiniMed when it comes time to get a new pump.
But, after hanging out the the OC for a while, you get curious. There are people with Cozmo pumps, Animus pumps, Omnipods, and people with MiniMed pumps. I wanted to explore the different types of pumps. I wanted to see their features and read up on them.
I started out by visiting each website. Most of them were very informative. And all of them allowed you to request further information be sent to you via snail mail. I filled each of them out.
When I got to the Omnipod site, there was also the option to request a trial "pod". I did this also. I wanted to see the actual size and shape. I wondered how it would work with my clothing.
A trial pod has no insulin & no needle. It's basically just the size and weight of a real pod. When I received it in the mail my first thought was that it was smaller than I thought it would be. I let it sit in my living room for over a week before I finally broke down and put it on.
The instructions state to pick a place that will not be bothered by folds of skin. I already had an infusion site on my stomach and because of my weight (I'm doing the Biggest Loser D-Style...cut me some slack!) I felt like my stomach would not be a good site.
I looked on the website for some tips. Some of the people were wearing it on their leg. That was out for me as most of my jeans are fitted and it would look like I had a growth on the side of my leg (see! Vain I tell you!!). There was another picture with the pod on the back or side of the arm. This was something I thought I could live with. I slapped it on my left arm.
It was a little weird at first. I expected it to be. When I first got my MiniMed, it took some time to get used to.
Day one went by. I caught my arm (or should I say the pod on my arm) on a door frame. Twice. In the same day. And let me tell you, it's not pretty! Also, taking off my clothes, I got the sleeve of my shirt & the strap of my bra caught on the pod at two different times. Sucks. It HURTS!
But, I figured I'd get used to it.
Day two rolled around. I started my day out lazing around my apartment (it is the weekend after all). When I finally decided to get around to doing something, I made the choice to go shopping. I was looking for something to wear and I pulled out a pink tee-shirt that I hadn't worn in a while. When I put it on my heart did a little flutter. I realized you could see the pod. It wasn't like you could see it a little bit; you could see the whole thing.
Suddenly I didn't want to go shopping. I didn't want to leave the house. Because I didn't want anyone to see this large piece of plastic stuck to my arm. I started thinking about the post that Kerri wrote for dLife. And later, the one she wrote on her blog. In both posts, she talks about people staring at her Dexcom sensor on her arm. 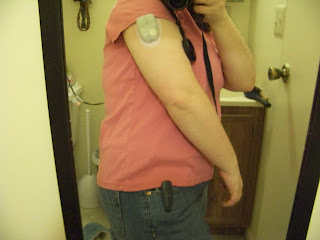 Did I want people staring at my arm? No way. But Kerri doesn't want that either. But was I strong enough to put up with the stares? No way. I took a picture of my arm and quickly changed shirts. I was a chicken. I was VAIN.

For the most part, people don't realize that I have an insulin pump. It's pretty inconspicuous. My CGMS is very small and I wear it on my thigh, so my pants or skirt always cover it. The pod was impossible to hide unless I had on a long sleeved shirt. And that's what I ended up wearing that day.

After spending all day shopping (and nearly ripping the thing off my arm a couple of times while changing clothes) I came home and took off the pod.

I love the fact that it's not tethered. But all in all, I don't think it would work for me.

The thing that made me the most sad was the fact that I let what some strangers would think about me, effect the way I would treat my diabetes. And it threw me back to feeling like Cara: iRobot.
Posted by Cara at 9:32 PM

Being untethered sounds good, but having seen the pod in person, it looks too bulky to be stuck right on me. I reckon I'm vain too, and just can't see myself digging such a big lump. The sensor lump is about as much of a lump as I can handle.

I'm vain too. I'll stick with my Minimed, because I can stash it out of site pretty easily. :)

Besides, I like being able to completely detach every once in awhile. Even the transmitter and pump set bother me sometime being on my skin so I can't imagine having a huge lumpy gadget adhered to my *arm*. Ugh. I don't know how people do it.

I just had this convo with the OmniPod rep at the pump class. She asked me why I was so against the pod? I explained that I didn't want Kacey to have to be stuck to a pod for 3 days and it just seemed a bit big for her. Plus I couldnt turn an 8yr old loose with a PDA and expect her to keep up with it. The rep responded with...Does she keep up with her meter? Ummmm yeah cuz I have control over it! LOL! She continued to give her "spill" like a used car salesman but I wasnt sold on it ;)

I like the idea that a piece of medical equipment that is $6000+ will be "attached" to Kacey so she cant lose it...LOL! And if she wants to disconnect for any reason she can :)

i LOVE the omnipod, and i wear it everywhere. in the summer, it just works much better on my arm. i also don't mind answering questions about it - - i like to tell people that i'm robotic.

one pharmacist even thought it was a pedometer.

My daughter is 5 and she started on the Omni Pod when she was 4 1/2. So far we love it. It did take a couple of days for her to get used to having it on her body, but it didn't take long. We do still have occasional issues with accidentally pulling the pod off but usually only when she wears it on her lower back/hip area. We have been really successful at hiding it under her clothing. I have heard in a lot of my reading though that if you have been on an insulin pump before you are less likely to be happy with the pod.

It's nice to check out all of the options though isn't it?