Dentists and Eye Doctors, oh my....

Today I had 2 different appointments. I set up my dentist and eye doctor on the same day to basically get them both out of the way. I was overdue for a dentist appointment and a little late for an eye doctor appointment. Getting them both in one day helps with work also.
I chose to put the dentist appointment first because I knew, after eye dilation, that I would be useless for the rest of the day. My eyes take an abnormally long time to return to their original state.
At the dentists, it was discovered that one of my fillings had chipped. This means another appointment to get it fixed. Also, I apparently have a wisdom tooth coming in. I didn't know it. And I've not had any come through before. The dentist said since it's not bothering me that we'd not worry about it for now.
A good cleaning and fluoride treatment later, and I was ready to go. No new cavities. Nothing major, other than the chipped filling. I have to say, I left feeling pretty good about myself.
I asked my mom to drive me to the eye doctor. I've been going to the same eye care center since I was about 15, save for a couple of appointments in college. During my time there, I've only seen 2 eye doctors. One of them, sadly, passed away when I was just starting college. The second doctor had been there every since.
Today, I found out there's a new eye doctor. Apparently the other one moved on. When I saw the new doctor, I nearly fell over. I went to high school with him! He was YOUNGER than me! And he's an eye doctor. Okay, that makes me feel really old. I don't think he remembered me. Which is fine. But I have to say, I almost yelled, "Oh my GOD! You're my DOCTOR???"
However, he did a good job and was very professional. It's just a little weird having someone younger than me, be my doctor.
Sadly, when he was done with my eye exam, the bad news came.
I have bleeding. In both eyes. 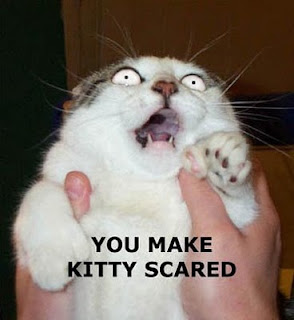 After 24 years of diabetes, and only 1 other time of having any bleeding at all (which was gone the next time I went in), I have bleeding in both eyes.
He was very positive about it. The right eye, he expects could be gone at my next eye exam. It's that small. The right eye, he sounded like he didn't expect it to go away. He did say it's on the outer area of my eye, so it's not an issue at this point, as far as vision goes. He even said it could possibly get better.
But he didn't sound like he expected it to go away.
I have an endo appointment next month. He planned on sending my report on to my endo. He also said he didn't really thing that I needed to come in for a 6 month appointment. His words were, "It's such a small issue right now, unless you have a change in vision or some other problem, I don't even feel like we need to see you again for a year. Six months is not necessary."
But I'm scared. I know it's not a big deal. I know, after 24 years of living with diabetes, my eye issues are minimal compared to what they should be. But I'm still scared.
Some people with diabetes fear loosing a limb. My greatest fear is losing my sight. I could figure out how to deal with being in a wheel chair or on a walker. I could figure it out.
But being without my sight is so very scary for me. So many of my joys and hobbies depend, almost totally on my sight. Reading, cake decorating, watching Broadway shows, blogging. Even my sign language. They all require my sight.
Could I do it? Could I live without my sight? I'm sure I could. God won't ever give me anything I couldn't handle. I meet people every day that say they couldn't have diabetes. But until you have it, you don't know what you can do. But I have to say, I hope I don't ever find out what it's like to live without my sight.
And knowing I could do it, doesn't make me any less scared of actually having to do it.
Posted by Cara at 7:22 PM

Cara, Eye sight is an issue I worry about a lot. With my recent fingers/toes tingling/numbness stuff I can definitely relate. All I can say is, do your best. Try not to stress about it. And if you need ANYTHING, I am here for you. ***hugs***

Thanks Katie. It means alot.

Cara, I am sorry to hear that you didn't get an all good report from the eye dr. I understand that you're scared ... all of the things that could possibly happen to us are scary. But it does sound like it's been caught early which is a good thing. And hopefully with God on your side, it won't get much worse. My only suggestion would be to maybe have an exam every 6 months just to be on the safe side, even if he didn't think it was necessary. But that's just my opinion. Sending good thoughts to you!

I'm with Katie and Stacey.

Stacey and Crystal, thanks. The rational part of me says this isn't a big deal. But when you hear "bleeding in the eye" as a diabetic it scares the crap out of me. Rational tends to go out the window.
Also, I'm going to talk to my endo about it to see what she thinks about me having more frequent visits.

This makes my shake in fear. As everyone else has echoed, this is an incredible fear of mine. I've been told in the past that I have slight retinopathy, about as minimal as it can be, and it's later gone away by the next visit. After 26 years with diabetes, I too am blessed without much complication at this point. But the fear being realized is so scary. Best wishes and vibes your way, Cara. We're with you.

You are going to be okay. Everyone is secretly terrified of hearing those words. It's the one test we get instant results from, and the one I still pray on the night before. Nothing freaks me out more than eye problems, and no one gets it but you all in the OC.

Definitely tell your endo. Definitely go for another appointment in 6 months. Or 3 months. Or however often you feel like you should go. Find another eye doctor, if necessary, and have another exam. If that little voice tells you to have them check again, have them do it. They're your eyes, after all. The chances are very good that the bleeding will resolve itself, and catching things early is always good. But still...listen to YOUR gut, not theirs.

Hi Cara!! I'm sorry about the eye dr news, but I'm glad that it isn't too serious at the moment.

I understand the fear of loosing your sight. My sight is what I want to hold on to the most...I want to be able to wake up and see my husband when we are old, so I can relate to that completely.

I'm thinking of you, and praying for you to get good news a year from now! You are right though, God wouldn't give you something you couldn't handle. Lets just hope you won't ever have to cross that bridge!

I hope that this news doesn't stress you out too much. You seem to be handling it well so far!

If I had a glass of some sort, I would cheers to your continued good health!

Hi Cara! I usually read your blogs but today is the first time I've felt the need to comment.

My mom is a type 2 diabetic, and she has recently started having eye trouble. Unfortunately, she didn't act on it immediately, and she's had to have several eye surgeries to stop the bleeding. While they can't repair the vision she's already lost, they are doing their best to ensure she doesn't lose anymore.

I agree with an above poster, that you should get your eyes checked in 6 months instead of waiting a year if you are nervous about it. When it comes to something this important, better safe than sorry!

Good luck with it all, and I will give you all of the support that I can!

Hi Cara,
I'm really sorry to read your news.
But - as with everything, they're your eyes and so if more frequent appointments will help you cope then that's what's needed. A doctor can't make that decision for you.
And yup - sending a big hug!

Hey Cara-
I understand your fears completely- but let me tell you something friend. Your eyes could improve or stay the same for years and years and years. Look at this as the glass being half full.
You and your Dr. are aware of the problem and are keeping an eye (no pun intended) on what's going on.That is a gift.
I'm with Stacey- go to the Dr. every 6 months. I know getting your eyes dialated sucks, but it's worth it!
Stay strong friend, and know that lots of prayers and positive vibes are being sent your way!
Kelly K

I know just how you feel, because I'm right there with you. For the past 2 year, I've had to go every 6 months to check tiny bleeders. Each time, the old spots are gone but new spots have replaced them. And it's damn scary, no matter how much the eye doctor tells you it's nothing to worry about yet. We worry anyway. But really we are lucky. We know about them, and if the day comes that something needs to be done, we can take care of it before it turns into that huge problem that make us lose our sight. Stay positive, my friend!!