Theatre Thursday is here again folks! Lately I've been to see several shows, so I should have a Theatre post for the next few weeks in a row.
Back before Christmas my mother and I watched Mamma Mia!, the movie. We both thought it was thoroughly cheesy and we both loved it (If you know us, you'd know that both thoughts are completely possible at the same time...). 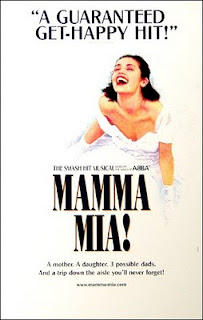 Through my wealth of useless knowledge about all things Broadway related, I knew that Mamma Mia! the Broadway touring production was coming to the Tennessee Performing Arts Center (further known at TPAC) in the spring of 2010. Immediately, my mind went to Christmas gifts, and what a great gift it would be to take my mom to see the show.

My mother has never been to New York. She's never seen a Broadway show before. But she spent a lot of time growing up doing plays at school and singing show tunes in choir. In fact, she sang me more show tunes than lullabies when I was a child. She is basically the reason I love musical theatre so much. 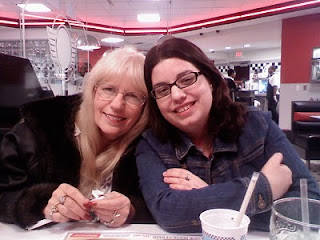 After confirming that I could get tickets before Christmas, I knew right away that's what I was going to do. I also purchased the movie, unwrapped it (and let's be completely honest, I watched it, too) and put the tickets inside the DVD case.
She was thrilled when she opened her Christmas present. And I knew that I'd not only get to hang out with my mom (which I don't do nearly enough anymore), but I'd also get to see a show. And what's better than a show? Sharing it with people you love, of course!
This is a few weeks ago now, so I figured it's time for the theatre critic in me to come out. First of all, I'd like to say that both my mom and I, along with a great friend of mine that went with us, had a fantastic time. Second of all, I'd like to say the the show is every bit as cheesy and fantastic as the movie. Actually, a little more fantastic, just because it's live theatre and not a movie.
Mamma Mia! has been on Broadway for several years now. It's currently playing in the Winter Garden Theatre (where Cats was for so many years!). The poster even says "The Global Smash Hit". And it really is global. The show currently has productions in London, New York City (of course), Norway, and Mexico. There is also a North American Tour, an International Tour, a Dutch Tour, a Spanish Tour, and an Australian Tour. Whew! If that doesn't say "Global Smash Hit", I don't know what does.
Now, onto my review:
For those of you who have never seen the movie or the musical, I'll give a brief synopsis. The show is about a young woman, Sophie, who is about to get married. She has been raised by her single mother, Donna, never being told about her father. In her desire to meet her father, she discovers that her mother doesn't even know who it is; there are three possibilities.
So, without Donna's knowledge, Sophie invites all three men to her wedding, hoping to discover who her true father is.
Of course, hilarity ensues, especially upon the arrival of Donna's old friends Tanya and Rosie, and her three ex-beau's, whom she's not seen in twenty years.
Throughout it all, Sophie learns that family is what you make it, and Donna learns that sometimes it's okay to ask for help and that love doesn't always go away.
And the greatest part of the show: every single song is an ABBA song. I wasn't born when ABBA was popular, but like most people (at least people with good taste in music ;)...) I've learned many ABBA songs over the years. And I can assure you that nearly every song that you would know by ABBA is in this show, from the title track, Mamma Mia, to Dancing Queen. There are 22 total songs in the show, and I knew about 80% of them going in.
All the actors and actresses did a good job, but Rachel Tyler, who played the role of Tanya, and Kittra Wynn Coomer, who played the role of Rosie, stole the show. Their comedic timing was impeccable and they were probably the most talented of all the actors and actress in the show.
So, is Mamma Mia! the greatest musical ever written? No way. Not by a long shot. But it's fun, and funny, and is something even a non-musical lover could enjoy, if for nothing more than the songs. There seemed to be a large number of women enjoying the show with friends, especially women who were young during the ABBA reign. And I know that I enjoyed every second of it.
Posted by Cara at 12:29 PM

What a terrific idea for a Christmas gift!! It's gifts like that that really mean something and will be remembered for years to come. I'm so glad you and your mom got to see the show together, and that you had a blast!!

I love the movie - how cool that you and your mom went to Broadway together.
Great photo of both of you!