I am not very OCD about many things, but one of the things that annoys me is if my infusion site for my insulin pump is on a different side of my body than my CGMS sensor site. That’s usually not such a big deal, except when I go out of town for a weekend knowing I’ll need to do a sensor change…and take everything to do the change, except a new sensor.

Because of that and because I had been waiting to hear if my new insurance policy will cover my sensors (it’s the same company, but a different policy, so some things might not be covered), I decided to take a week off from having my CGMS sensor in week before last.

By the end of day 2, I knew I was going to hate every second of it. Because I’m so used to having the sensor, I have gotten out of the habit of testing as regularly. I still check around 6-8 times a day, but not as often as I should (especially when I’m at work and I tend to get busy and forget to test).

When I don’t test regularly, I basically don’t have a clue what’s going on with my blood sugars. And because I was not testing as regularly, AND I didn’t have a sensor in, I have dealt with some crazy highs and lows in the past week. I had several lows, but managed to catch most of them before they go too terribly bad. I also had more highs than I’d like to admit. One day I nearly hit 400. And as we all know, that left me feeling horribly ill and tired. 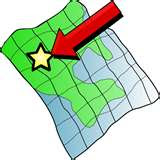 Having CGMS is like having a map of your blood sugars. Or even better, having GPS navigation. It tells you where you are going (maybe not how to get there…but still, it’s better than nothing) so you know what to expect. When you have CGMS, going without it is like taking off on a cross country trip. With no map AND no sense of direction. You might think you’re headed for California and end up in Wisconsin.

Sure, sometimes you can feel your highs and lows, but if you have been a diabetic for a long time like I have, often the ability of sense your highs and lows is dampened. Basically, your body gets so used to the highs and lows that it stops giving you the signs. If I’m lucky, I can still catch my highs and lows before they get too extreme, but sometimes I’ll be 52 and not even feel it. Once, I was 38 and still functioning normally. Other times a 69 will hit me so hard I’m left reeling.

That’s why I need my road map/GPS. I need my CGMS to keep me where I need to be. After 25 years of living with diabetes, my body has already suffered years of irreparable damage. And by keeping my blood sugars in range to the best of my ability, my body suffers less. This means fewer complications. Which means a longer, healthier life (are you listening insurance companies?? You should be).

By early last week, I put a new sensor in (leaving me 1 left). I needed to get my map back. I needed my control back. Mid-week a dear friend of mine in Nashville sent me a few extra sensors to tide me over until I heard something from my insurance company. Ironically, the next day I got my shipping confirmation from MiniMed that they were sending a new box of sensors (which means my insurance company said “okay”).

I got my ability to care for myself back. But how many people get turned down for CGMS, or have to fight it every step of the way? This post didn’t start out to be one talking about insurance. But it turned out that way. Sometimes I think my posts turn into something totally different for a reason. Maybe someone, somewhere will read this and realize how important it is to have good technology AND for people to have reasonable access to said technology.

Good post and I agree! CGMs, test strips & insulin pumps are crucial and act as a GPS for every single person with diabetes - And I told the FDA so last March when I posted about meter accuracy.