About two weeks ago, Crystal Bowersox (last season’s runner up on American Idol, and fellow T1 diabetic) tweeted that she would be performing at the Bluebird Café in Nashville on February 26th. Knowing that the Bluebird is a very small venue, I immediately went to their website and saw that tickets were only $10 (plus a food/drink minimum). With that price & that size of venue, I knew I’d do whatever I could to be there.

The reservations became available last Monday and I stalked the internet site (continually clicking refresh) until I could reserve a table for two. I wasn’t sure who would be going with me, but I wasn’t going to go alone, and I was sure I’d find someone to go with me. Strangely enough, I only had 1 person (locally) respond to my request for someone to attend with me. Everyone seemed to be busy or too far away.

I’d never been to the Bluebird Café before last Saturday night. For those of you who aren’t familiar with the Bluebird, it is basically a singer/songwriter showcase. It’s very small and has a “listening room” type policy. Basically, it’s the person, and their guitar (or other instrument of choice) performing their music. It’s very well known in the music industry. It has a ton of history and some amazing performances have happened there.

From the first time I heard Crystal perform on American Idol, I loved her voice. Finding out that she was a Type 1 diabetic made me love her even more. There’s just something about the d-connection that makes you root for a person. During her Idol run, I posted two open letters to her. I’m sure she never read them, but it was a way to get my thoughts out.

Amy T from Diabetes Mine ended up getting an incredible interview with her. Even then, I knew I’d love to meet Crystal. If for nothing more than to tell her that I think she’s amazing. And Saturday night I ended up standing in the same room, less than 6 feet from her.

First off, diabetes aside, Crystal (and her husband, Brian Walker, who also performed) is amazingly talented. She’s also amazingly funny and good natured. She came right out and said she didn’t have a set list, so part way through the performance, she basically started taking suggestions from the audience. She did a great mix of songs from her album (which you should GO BUY!), songs that are her’s but weren’t on the album, and covers of songs (some of which she performed on American Idol). 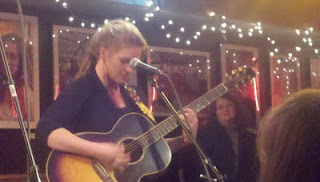 She talked about her first time performing at the Grand Ole Opry, which was totally impromptu the night before. She talked about being star struck by Vince Gill. It was kind of like listening to one of your friends telling you a cool story about something that happened to them. Crystal Bowersox gives down-to-earth a whole new meaning.

But, the diabetes was there too. I could see her diabetes tattoo on her wrist while she played her guitar. And before she came up on stage, she and her husband were sitting in the corner, not far from me. I couldn’t see them because of the way the wall was, but I heard the familiar “shunk” of a lancet device. I wasn’t listening for it. But I heard it. It’s a sound you can’t mistake when you’ve been hearing that sound for so many years.

Afterwards, Crystal stayed to sign autographs and take pictures. I tried not to go completely “12 year old stalker” on her. I tried to be normal. But I did tell her that the D-OC loves her. And I asked to see her tattoo (it’s beautiful by the way). I just wish I’d had enough sense about me to ask to get a picture of it.

I also managed to get her into trouble with her husband. :) I asked if she had a CGM. She told me she did, but didn't have on a sensor at the moment. I told her I didn't either (apparently we were both taking a break). But Brian was standing behind her and heard her say that and he said, "You don't have a sensor in? Why not?" :) She did ask me if I liked mine. I told her I loved it and told her about putting them on my thighs instead of my stomach (less brusing for me). Maybe I actually shared something with her that could help? That would be pretty awesome. 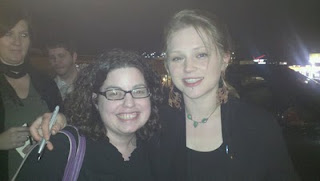 Meeting Crystal was pretty amazing. She’s an extremely talented songwriter, an amazing muscian and singer, and a very strong woman living with diabetes. I’m glad to say that I was able to meet her. Thanks, Crystal, for being so kind to all of your fans. I know it meant a lot to me, as I’m sure it did the others who were there.
Posted by Cara at 5:04 PM

Way AWEsome!! Thanks for sharing.

That rocks!! I would love to see her! So glad you got to meet her- thanks for posting the pics and sharing!

Do you think your smile could be any bigger?
I'm so glad you had a great time.

OMGGGGGG! Sooo cool!! I wish we lived closer because this D-Momma definately would have taken you up on it!! You look like you had a wonderful time!!! :)

OUTSTANDING my friend - Thanks for sharing and representing the DOC !!!

Exciting exciting! I'm so happy that you got this amazing opportunity

Yay yay yay yay yay!!! I'm glad you had such a great time and that you got a chance to meet her!! :)

How cool is that?!? What a great experience! She sounds amazing! Thanks for sharing!