Diabetes isn't Deadly
As usual, I'm behind on my blogging. I tend to take things going on in our community and think about them, read what others are saying and then think some more before I write. One of the biggest myths that I know of about diabetes is that diabetes isn't deadly. If you ask your average person on the street, they'd tell you that as long as you take your medicine and eat well you'll be fine (that's if they don't just tell you to lose weight and quit eating sugar).

The truth of living with Type 1 diabetes is that without insulin I will die. Anyone living with T1 will die if they do not take insulin. But did you know that even though you take insulin, you can still die as a direct result of diabetes? I'm not talking about long term complications that end up in eventual death. I'm talking about at any moment, at any time.

I wrote a little bit about it when there was a young girl who died in her sleep from undetected low blood sugars. It has become one of my most popular posts ever, but the truth of it is in the post. Basically, no matter how much we do right, sometimes it's not enough. The insulin we take to stay alive can also take our lives.

If it were as easy as a set amount, or a set insulin to carb rations I think none of us would worry. But so many other things factor in. Stress, exercise, lack of exercise, change in routine, illness, hormones, and even changes in weather/seasons can all have an effect on blood sugar. And most of the time these variables are unpredictable at best. Then add in "hidden" carbs, the effect of fat on digestion, the occasional "bad" batch of insulin....well, you might be starting to get the picture.

Diabetes is with me every minute of every hour of every day. It's with me always. And in that, I don't get the chance to say "time out" when things in my life are getting crazy. I live by myself. This is something that most 30 year old women would think nothing about. I can take care of myself....right?
But the truth is that with tight blood sugar control (i.e. as close to non-diabetes levels as possible), you deal with more low blood sugar levels.

So the fact remains that I could die in my sleep. It is possible. It's a scary thought. I don't fear being dead. My faith in Jesus tells me that being dead isn't the end. But the thought of dying does scare me. I don't want to leave before I've finished whatever I'm supposed to do in my life. I have goals to accomplish and things to do that make the thought of diabetes stopping that a terrifying thing.

This past week JDRF took out an ad in The New York Times calling the FDA to action in regards to approving something called a Low Glucose Suspend function on insulin pumps. An insulin pump is kind of like an IV. Even if my blood sugar is low, it continues to give insulin (which in turn, continues to lower the blood sugar levels). With a low glucose suspend, the insulin pump would automatically (without my help) turn itself off. This could save lives, but the FDA has yet to approve it, even though it is now widely available in Europe. Below is the ad:

1 in 20 people. There has been argument over how accurate that number is. But all I have to say is this: Piper could die in her sleep from a low blood sugar. She's a child. So could I. I'm an adult. Any person who takes insulin for their diabetes, regardless of age, race, gender, religion....any of us could die. The fact that there is a possibility of death (regardless of the statistics) is too much. I DO NOT WANT TO DIE IN MY SLEEP. Not from a disease that I work so hard to live successfully with. Not a disease that's been with me longer than I can remember.

The fact that there is a child in that ad draws attention. I understand why JDRF uses children. It's a great marketing tool. It's extremely effective in touching people's hearts. The thought that a child could die NEEDLESSLY will bring action about. However when I look at that JDRF ad, I see this: 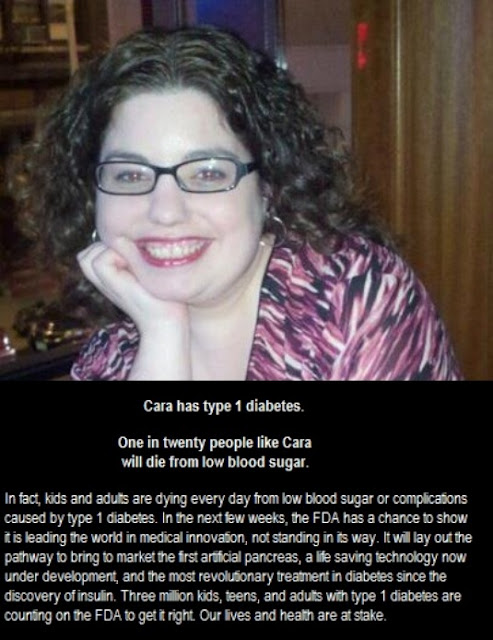 And the faces of all of friends who are daily living with diabetes. The myth is that diabetes isn't deadly. The truth is that DIABETES KILLS.
﻿
Posted by Cara at 7:00 AM

That's a powerful change in the ad.

Forget the people that I know from "only" online, I have met more that 20 people with Type 1 diabetes in person through my various meet ups. It is unacceptable to me to even think of losing one of my friends to this stupid disease.