The Friendly Side of Flying

As you may know, flying with diabetes can be a flat out pain in the rear. Not only do you have to deal with the "normal" part of flying (3 oz containers, no shoes, carry-on size luggage, etc), when you throw diabetes into the mix you run into rules and regulations and technology issues many times.

I treat my lows with juice boxes most of the time. Since even a small juice box is over the 3 ounce size limit for flying, it can be an issue at security. Most of the time I only have to mention that I am a Type 1 diabetic, but I have had them argue with me before. So I've started taking the print off from the TSA website that states that I can take juice, just in case.

Also, Nashville airport (which I nearly always fly out of) has nothing but full-body scanners anymore. For most people, this isn't an issue. For me, it requires extra steps. According to my insulin pump and CGMS manufacturer, full-body scanners are a no-no. This means requesting a full pat down of myself and a swabbing of my hands and insulin pump for explosives. I travel enough that I'm used to it by now, but I also have had times when I've had to argue with TSA agents in order to get the pat down. Due to that, I now have a print-off from the website of my insulin pump company that states that I cannot go through the full-body scanners. You know, just in case.

A couple of weeks ago, I took a trip out of town and packed up my diabetes supplies, my print outs, and explained to my travel companion that two hours early to the airport was pretty important to me, due to the issues that I often face when dealing with airport security and TSA.

We were running late that day (completely my fault, not hers) and pushing time close for our flight. I tried to place myself in the shortest possible line, knowing that I was going to have to wait on a female TSA agent to do the pat down. I was blessed. I asked to opt out due to medical equipment and the guy never even batted an eye. He directed me to the metal detector and almost immediately there was a female TSA agent waiting to get my items (they won't let you touch them until after they're done with the pat down) and direct me to the glass box.

I started to explain about my medical equipment to the agent and she basically reached down and showed me her insulin pump....exactly like mine. Turns out she was wearing the same pump and CGMS that I was. We chatted while she did the pat down and talked about things like infusion sites and CGMS sites and meeting people with diabetes. It was quick, nice, and I LOVED not having to explain myself to the TSA agent.

I handed her a card with my blog address on it, so she may in fact be reading this post. If so, THANK YOU! You were wonderful and helped make that particular experience with TSA and airport security much friendlier. 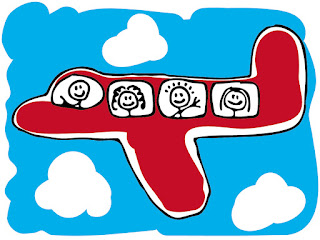 That was the friendly side of flying. I can only hope I'm lucky enough to get her again when I fly (which I'll be doing a lot of in the next couple of months). Either way, it was a fun experience.
Posted by Cara at 8:57 PM

Glad I could help your day! Sorry I'm just now getting around to your blog. Anytime you fly through Nashville, just ask for Heather, I will try to get you :-)

You know, glucose tabs work better than juice boxes in case of a low. And no airport hassle with them, either.

Just found this blog! Very enjoyable post, I have just got my own pump "Bully" and I fly in September so I am already figuring things out in my head in preparation and hopefully I wont forget any rules like the X-Ray no-no's!!
Thanks for the post, Danie.

Juice boxes are my treatment of choice too! I can't get the glucose tabs down with the dry-mouth that accompanies my lows.

What a great post, Cara! So often we hear about the horror stories or problems in the airports, but love that you got a great one and told that positive story here! I've never met a fellow PWD who's a TSA agent, but hopefully I will get that chance someday! Thanks for sharing this.

my family is getting ready to fly this weekend and i'm already dreading the whole pump hassle. my 12 yo daughter is not keen to ask for a pat down. ;P

this story brought a smile to my face, so thanks! :)