Why I Love Live Theatre

I had a diabetes post that I was writing to be posted today, but after this morning's news about Rue McClanahan's death, I started thinking about all the people we've lost in recent years. As many have pointed out, Betty White is the only remaining "Golden Girl". In 2008, we lost Estelle Getty and just last year Bea Arthur passed away. 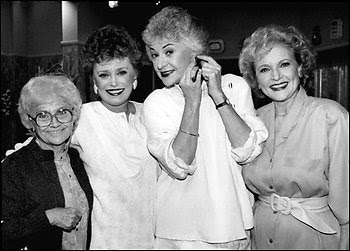 Something all of the "Golden Girls" had in common was that they, at some point in their lives, did theatre. Which brings me to my topic, and the title of my post.

Why I love live theatre. There are probably a million reasons that I could name. But the biggest one that I can think of is the intimacy. If you've ever seen a play or musical, even a school play or a local theatre production, you can understand what I mean when I say that live theatre is intimate. Watching a movie, or television show is not very interactive (unless you're like me and like to yell at your TV alot). You sit. You watch. You watch again on rerun or DVD. And every time you watch it, it is exactly the same.

With theatre, you never know what you're gonna get. Sometimes it's a misstep in a dance number, or a giggle from an actor, and a missed cue or line. Sometimes the show goes off without a hitch. But either way, you are in the room with the actors. Not in the room with the TV. Depending on where your seats are, you could be a few feet away from them. But sometimes, just being in the same room is magical enough.

You may ask, "Is that why you go? To see famous people?" Nope. Not at all. The first time I saw Kristin Chenoweth she wasn't famous. I had no idea who she was. Same goes for B.D. Wong. I had no clue who Christine Ebersole & Rebecca Gayhart were when I saw them. I will admit that some shows I pick because of who's in them though. 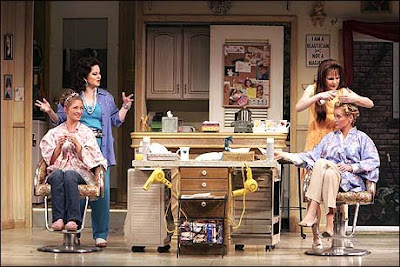 When I saw A Little Night Music with Allison a few weeks ago, my sole reason was to see Angela Lansbury. Catherine Zeta-Jones was in the show too, but I have known who Angela was since I was a child watching Murder She Wrote with my grandmother. She's also had an amazing Broadway career, with a total of 5 Tony's to her name. Simply to be in the same room where she was performing her craft was an experience I will never forget. 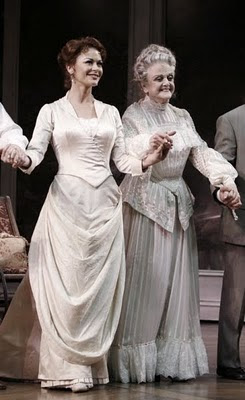 At each and every play or musical I've seen, right down to local and school productions, there is always a standout. Someone who catches my eye and makes the show. Sometimes it's a "star". Sometimes it may be a person in the chorus. Someone who may only have a line or two.

At each show I see, I think to myself, "This will never happen again. This show, exactly as it is, with these actors and this audience, will never ever happen again." That misstep. That ad lib. That glance at the audience member in the front row. It will never happen exactly like that ever again. In a way, each and every show is a part of history. And I believe that's part of what makes theatre so exciting. You feel the excitement of history being made. And when you're in a room with several hundred other people and some very talented actors, the energy and excitement is contagious.

I know it may sound like crazy rambling, but this is part of the reason I love live theatre. As we lose more and more Hollywood (and stage) talent, it's a honor to be able to say that I've not just seen their movies or TV shows. But to say I've seen them live and in person. Even shaking some of their hands and getting autographs. Not everyone can say that. So even if the star you're seeing the the star of their high school production, I encourage everyone to go experience the wonder that is live theatre. Because you'll never know what you'll get.
Posted by Cara at 5:14 PM

Email ThisBlogThis!Share to TwitterShare to FacebookShare to Pinterest
Labels: theatre

Cara-
Heartfelt, and it captured the magic of the theater on every level.
Simply put, it's a BEAUTIFUL POST.
Kelly K

You're right about never knowing exactly what you're going to get in live theater; that's part of what makes it so great! Thanks for a great post!

Wonderful post, Cara. Thanks for sharing this. This is a sad day with her loss, as it's a sad time whenever we lose actors who've come up through the theater ranks. I spent my high school years in the musicals, and my best friend was the lead role every year - he's since graduated and gone on to theater in NYC, living the dream. But that is pure, genuine, unadulterated fun on stage and just can't be replicated or replaced.