As some of you may remember from Diabetes Blog Week, I am not a low carb person. But I'm also not anti-low carb either. If I find a recipe that I like, I make it. Carbs or no carbs. About a week ago I was thumbing through Diabetes Forecast Magazine. There were several recipes that caught my eye, but I tend to be lazy when cooking, so I look for simple recipes that won't take a lot of time or ingredients.
I love yellow squash and zucchini, so when I saw this in the magazine, I knew I had to make it. 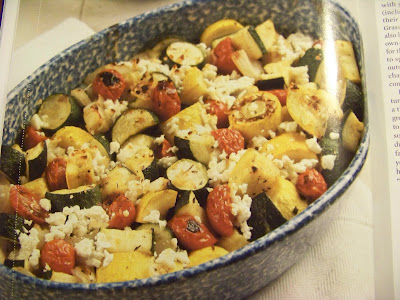 I had to change a few things up, like changing some spices (the spice it called for, I couldn't get at my local Wal-Mart & was too lazy to hunt for it all over town). But overall, I think it turned out pretty good. My version: 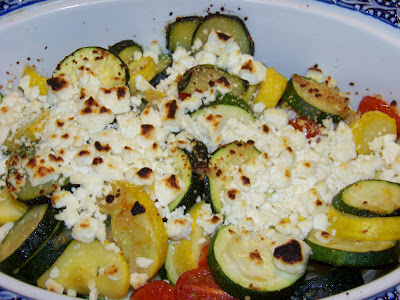 The carb count on the recipe said a serving was 5 grams of carbs. I also made some lemon pepper chicken and a green salad. I thought it looked kind of pretty: 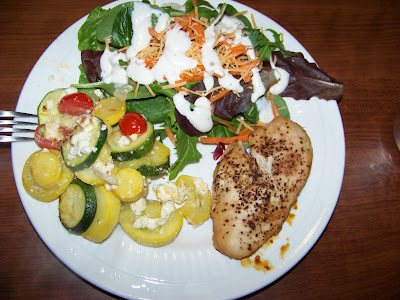 I ended up bolusing for 20 grams of carbs and it turned out great. Two hours after dinner I was 123. Can't ask for much better than that. This is one time that low carb was wonderful. :)
And as it is, I can't find it again. I tried to find the recipe, so I could put the name of it, and maybe a link to it on this post. But I have spent an hour digging through my old Diabetes Forecast magazine and can't find it for the life of me. Figures, huh?
Posted by Cara at 5:32 PM

Email ThisBlogThis!Share to TwitterShare to FacebookShare to Pinterest
Labels: food

Looks yummy!
You need to find the recipe so you can share it with all of us.

wow, is that feta cheese?

Hey!! Crazy thing happened. I was thinking about your delicious looking dinner, and so I opened up one of my diabetes forecast magazines (most recent I think) and there it was! So here's the recipe in case you can't find it still:

1. Preheat oven brioler. Heat the oil lg skillet over med high heat. Add the onion and saute for 4 minutes. Add the zucchini and yellow squash and saute for 2 more minutes.
2. Add the Herbes de Provence, cherry tomatoes and salt and pepper. Transfer the vegetable mixture to a small casserole dish. Sprinkle with feta cheese.
3. Place the casserole dish under broiler for a few minutes until the feta cheese melts.

I think I'm going to try it tomorrow!!