I’ve had a history of issues with the new MiniMed Revel in regards to the alarms. During the day, they are fine. I love the predictor alerts. They have been fantastic for catching lows & highs BEFORE they get too low or too high. But at night, I don’t hear them. The new alerts left something to be desired. They are not as loud as the MiniMed 722. And sometimes I didn’t even hear the 722 alarms at night. But with the 722, after a certain amount of time the pump starts to vibrate. And continued to vibrate until you turned off the alarm. More than once that feature saved me. But with the new Revel, the alarms are not as loud. On top of that the vibrate feature on the pump is different from the 722. It vibrates for around 5 seconds and then stops. And doesn’t vibrate again for a while (I think about 15-20 minutes). This is a major issue for me.
It’s six of one, half a dozen of the other. I LOVE the predictor alerts. And during the day, the Revel is fantastic. But at night, especially when I live alone, I’m dealing with a potential disaster. I’ve been lucky so far, but I worry sometimes. I worry that the worst will happen. That I’ll be alone, not hear an alarm, and have a seizure or something.
I’ve talked about this in blogs before, and a couple of times on Twitter. But several weeks ago, Jen from Twitter (@Jenloves2travel) suggested using my old pump at a receiver of sorts. Basically, linking my sensor to BOTH pumps. And keeping the old 722 on my nightstand, making it easier to hear.
I didn’t even know that was possible. And it took some trickery, but it worked. I had to fake out the 722, by putting a reservoir in the pump and priming and then removing the reservoir. At that point I could link up a sensor easily.
I’ve been doing this most nights now. And it’s really giving me some piece of mind. I hope that it continues to work. And so far, it’s done some pretty awesome things. One night the 722 went off and I looked at the Revel. It had gone off a couple of times & I hadn’t heard it. 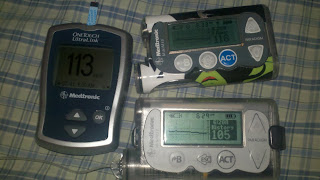 So, until MiniMed or some other company gives us the option of different volume levels and/or a separate receiver (Letter to Santa), this will have to work. Talk about creative engineering.
I want to give a BIG thanks to Jen, for the idea. And maybe it can be passed along to some of you, if you are having a similar problem.
Posted by Cara at 9:33 PM

Interesting. I'm actually one who prefers it the way it is. (Though I'm on the 722 at this point, and have used the Revel series briefly on a trial run). I get annoyed with that very constant reminder - even when I really should be doing something about it. Mostly have it on vibrate all the time and feel it doing so in my pocket or at waistline at night, so don't usually have issues there. But can certainly see the issue. Hope Minimed does something and gives future pump models that option to use!