I took my first trip to New York City when I was 17 years old. There were sixty-nine of us from a small town in the South that raised enough money to go on our Senior trip. Stops in Washington D.C., Hershey, Pennsylvania, and New York City were on the agenda. Most of us had never traveled much. Some of my classmates had never left our state.

Out of all the things we did, my single most memorable moment of the stop in New York was when we were leaving the city for the final time. It was late at night. As we drove out of New York my high school principal stood up and turned around and said, “Look over your shoulder. This may be the last view you ever have of New York.” I turned around. The unmistakable lights of the city light up the sky. In the distance I saw the World Trade Center buildings. The iconic markers in the skyline of New York. I sighed.

It turns out my principal was right. Many of my classmates would never and will never return to New York. I did. But only after the skyline, and the world, had been changed forever. In many ways the New York I visited in 1999 is nothing like the New York that I know now. It’s strange to me sometimes. When I think of 9/11 my first memory isn’t of the newscasts that played for weeks and months after the attacks. Of the buildings and the smoke and the horror. My first memory is of what I saw when I looked over my shoulder and out that bus window that final time.

As horrible as those hours, days and weeks following the attacks were, I saw something that I don’t think many generations have seen. I saw Americans coming together and supporting each other. It didn’t matter what race they were or what nationality. Gender, political affiliation, social status….it all took a backseat to the fact that we needed each other.

I was twenty years old. Not a child. But by no means an actual adult. In that time of life when you are trying to figure out who you are and what you want out of life was a time I also learned that the world can be cruel, and people you’ve never met can be kind. I didn’t need to know anyone who lived there.
That day left a mark on my life.
Since that time so many other things have changed in the world. I think we often forget, or try to block out the feelings of companionship and connection that we felt with complete strangers right after the attacks. Remember that. Remember that love you felt for complete strangers. Remember that anger you felt for the horrible things that were happening. Remember it. I know I do. 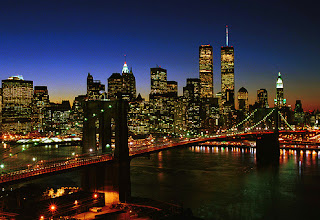 But even through all those memories, and all of my memories of my many trips to New York, one of the strongest will always be that last view. That over the shoulder, out the bus window view that would be my last view of the Twin Towers, and one of my most powerful memories of New York.
Posted by Cara at 7:46 AM

My first memories of the World Trade Center were during their construction; Dad worked at 7 Dey Street, down the block, and later at 2 Bankers' Trust Plaza, a block away. I remember him telling me about an iron worker who was straddling an I-beam many stories high, when the restraining cable broke. Knowing death was unavoidable, he waved to his co-workers on his way down.

My last memories of the site were months after the 9/11/01 attacks, after the odor of burning, rotting bodies and burning concrete and asbestos had dissipated from the air, many buildings still cordoned off because of damage and contamination, and the iconic remaining partial wall still standing in what had been changed from a recovery zone to a construction zone.

In between, there were a host of memories, from riding the scarily-fast-and-shaky elevators to hanging out in the observation towers to shopping in the concourse en route to and from The Other Half's apartment in New Jersey. Including watching the towers collapse on TV, the North Tower appearing to topple over and down past the street on which I worked, thanks to the angles of the Brooklyn-based cameras.