Labor Day weekend was a really relaxing weekend for me. I didn't have any real plans and basically planned to do a whole lot of nothing all weekend. Monday was time for my "full change," meaning I was due to not only switch my infusion site, but also my CGM sensor. My sensor came off first since I have to recharge my transmitter for a while before reattaching. When I took my IV-3000 tape and medical tape off of my transmitter and prepared to disconnect I noticed that my transmitter had a crack in it. This is NOT a good thing, considering that the transmitter is supposed to be water tight.

I knew that it was time to order a new one. I've had this one since February of 2008. Over three and a half years. The average transmitter through MiniMed is only supposed to last around 2 years and is only under warranty for 6 months. I did what I thought I should, which is called the technical assistance line for MiniMed. After talking with them, they advised me to stop using the transmitter and call back on Tuesday to start the process of getting a new system approved by my insurance company.

Here's the deal: I really respect the things that MiniMed says. I do. But just like I used my sensors for more than 3 days, I had no desire to stop using this transmitter (even with it's cracks). Mostly because I had no desire to go without a sensor at all. I've become sadly dependant on them. And at that time, I'd not been getting strange readings or anything. So I taped up the transmitter with waterproof tape and medical tape and put it back on. But I knew this wasn't a permanent fix. And as much as I love my MiniMed pump and CGM system, I saw this as the perfect opportunity to check out the illusive Dexcom system.

I'll be honest, I have almost no problems with the MiniMed sensors. My readings are fairly accurate almost all of the time. I rarely have issues with "bad" sensors. And I'm certain that I don't have many of the same problems as a lot of MiniMed users have. That's most of the reason I haven't checked out the Dex earlier. But with the upgrade to the MiniMed Revel pump, I'm having issues hearing my alarms at night. And that worries me since I live alone. And while being high for several hours in a night is an issue, but not really a life or death issue...what if I were to have a low? That's the whole purpose for having the CGM system. To save my life.

So, I called Dexcom. I got in touch with my local rep and talked with her on the phone last week. She has graciously offered to let me test a Dex for a week (I could have done it through my doctor's office, but my next appointment isn't until mid-October, and it's a 2.5 hour drive for me). I meet with her Friday. So far, my experience with Dexcom has been good. I've gotten great customer service. And I'm excited to try the Dexcom out. 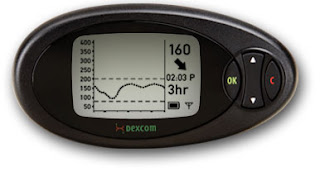 I'll be blogging about it after I get hooked up. I may even post daily, I'm not sure yet. Also, on the good side, I have a co-worker who's husband has the MiniMed CGM and happens to have a spare transmitter, which they have graciously let me borrow in case my current transmitter bites the dust and until I can make a decision on which system I'd like to go with.

Oh man...I wanna test Dex! I have the Medtronic CGM also, but would love to compare. Also, I had no idea the transmitter was only good for 2 years or so...what?!

I also have a Medtronic CGM, so I can't wait to hear what you have to say!

I am interested to read about your comparisons and which you decide to pursue.

my kid has a minimed cgm but she's not a huge fan of it and she's been asking about dexcoms recently (i think due to reading about them so much in the DOC). i'm interested to see how your trial period works out. thanks for sharing!