I love that the title of this post rhymes. It kind of makes me laugh. And this little problem is one that I NEED to laugh at. Otherwise it makes me want to bawl my eyes out. 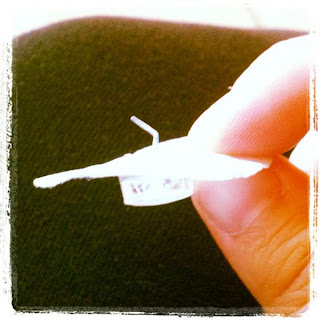 I’ve been pumping for nearly 7 years and up until a few months ago, I could count on one hand the number of times I got a “NO DELIVERY” alarm. I was pulling out sites left and right. About 90% of the time, the cannula didn’t look kinked, or bent. Basically, nothing looked like it was wrong. It’s frustrating because not only to I have to start all over; it’s wasting a perfectly good infusion set. I hate it. I may have insurance, but it’s still money out of my pocket and I HATE wasting money. When a sensor goes back, I can fake it for a day or so and let it have time to acclimate. You don’t have that luxury with an infusion set. Insulin = life.

In the past month it went from having “NO DELIVERY” alarms more than I’d like to having 3 or 4 in a row before I could get a site that worked. I was BEYOND frustrated. I called MiniMed to ask their advice and to let them know that I thought it was scar tissue. I had been given a box of 6 mm cannula Mio infusion sites and they seemed to not give me any trouble at all.

The MiniMed people were great, as always. They replaced my sets and agreed that it was a very good possibility that the 9 mm cannula Quick Sets were hitting scar tissue and getting blocked or bent because of the scar tissue. They replaced 4 of my sets with 6 mm Quick Sets to see if those would work and told me that they’d be glad to replace the ones I have if the 6 mm ones worked.

I got then in the mail last week and AGAIN, I went through 2 of the 6 mm Quick Sets before I finally gave up and put a Mio in my lower back. It’s been my stomach that has been causing me the problems. The other sites I use (arms, lower back) haven’t been giving me trouble. I’ve just come to the conclusion that A) for whatever reason, the Mios work better on me right now and B) that my stomach may be too riddled with scar tissue to have infusions sites anymore.

So, here are my questions: Does anyone know what the difference is in the Mio and the Quick Sets? If the cannulas are the same length, why does it seem like only the Quick Sets give me trouble? And do you have suggestions on other sites for me to put in infusion sets? Something I can reach myself, since I have no one to help me with them.

My worst fear being forced to take a “pump vacation” due to something like scar tissue. I don’t want to have to do it. In fact, right now I refuse to do it. I just don’t know exactly what to do. Part of me thought that a different infusion set might be better. If not the Mio, then something else. Part of me wants to FORCE the sites I have to work (though I know that’s not going to happen). And a part of me wants to deny that anything is wrong in the first place.

Why doesn’t diabetes play fair?
Posted by Cara at 10:52 PM

I've been using my upper belly....like almost above the rib cage, and my sides....that far up. I've got plenty of "real estate", if you know what I mean. Maybe staying away from your favorite spots for a while will help. And hopefully those Mios will help! ~Mousie

The only.difference I can see is the velocity and force of the inserters. The Mio seems to have more umph. The Quick Serter.seems more gentle. NUns get your Serter replaced?

If the Mios also end up giving you problems, I'd suggest the Sure-T (or just ask Medtronic for a free sample). I've never had a problem with them, and since the tiny needle you put in is so much smaller than a cannula-wrapped insertion needle, it may also lead to less scarring.

Another great thing about them: if the site gives you trouble, gently pull it out and stick it in somewhere else. Since the "steel cannula" is essentially a really short pen-neede, you can easily do that.

I second Scott E (mostly because I was the one who told him about the Sure-T in the first place! :D ). The Sure-T is a kink proof set. How do you feel about steel needle sets?!