One of the greatest things about having a CGMS is the ability to have super tight control over your blood sugars. Tight control (without CGMS) can lead to horrible lows that are often not caught in a timely manner. Having CGMS gives you the ability to catch those lows (and highs) before they get too bad and makes the overall control easier. 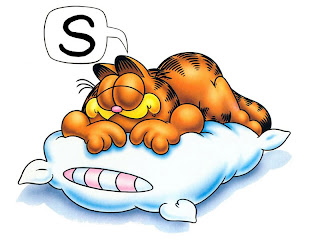 But, I have also noticed some down sides of having CGMS. I beep ALL THE TIME. Like constantly. Sure, it's good for knowing what's going on, but can happen at the most inconvenient times. One thing that tends to happen to me a lot is beeping in the middle of the night. I have weird episodes at night. Sometimes I will spike in the middle of the night for no apparent reason. Other times I will drop for no apparent reason. Making the CGMS a good thing. But causing me some serious sleep deprivation at other times.

Lately I've been having a lot of trouble sleeping. Not related to the beeping CGMS or diabetes. But trouble sleeping nontheless. However, beeping doesn't help the situation. And last night, my sensor finally died so I took it off to charge overnight. Part of me is scared to sleep without it, but there was nothing I could do because it was so late and a sensor would not have had time to calibrate before I went to bed.

I slept without the sensor on all night long. And I don't think I moved at all. I slept fantastically. I'm not sure if it was because I was so exhausted, or because I didn't have the beeping to wake me up. It was a wonderful night's sleep. But I woke up this morning with a blood sugar of 65. :/

So is it worth it? Do sleep better and risk getting sick or worse in my sleep? I don't think so. But sometimes I wish I could just take a break from the beeping.
Posted by Cara at 7:00 AM

I sometimes take dex off for a few days to give me a break from the constant "uh oh! you did something wrong!!!" alerts.

Dex can be set on vibrate, though, and that's not as bad as beeping. (although the vibrate is really strong - I can feel it when it's in my purse).

Hmm... I guess I don't have an answer for you. Just some commiserating. :-)

Oh, the BEEPING! I find that part really annoying, too. I sometimes reset my alarms before going to bed (then switch back in the morning) as to prioritize my ability to sleep.

Other times, I just sleep through the vibrating. :)

The beeping is enough to drive me batty!! (Luckily, Pete sleeps right through it so I'm the only one annoyed by it.) I hate to say this, and I absolutely don't recommend it, but sometimes in my groggy, half-awake state I set my sensor alerts to "off" until the morning. :( Kinda makes wearing a CGM at night useless!